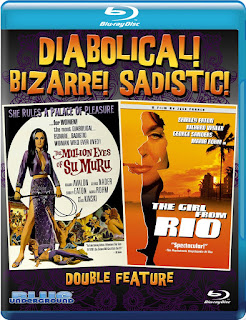 The Films
This double feature of films starring Shirley Eaton as the titular Sumuru who has plans to take over the world with her all femme army are a part of the kitschy, campy and colorful 1960s spy genre that was so heavily influenced by the James Bond films. A bit more for the cult or midnight film crowd than Bond may be, including a show stealing scene in THE MILLION EYES OF SUMURU from Klaus Kinski, these are the textbook definition of the films that Mike Myers would go on to parody thirty years later in the Austin Powers trilogy.

I will admit that I'm not a big fan of spy films and that I don't particularly care for James Bond. To put it simply those films and I have never clicked. I've never felt any sort of longing to watch them or dig deeper into the genre and there's never been a kinship between us. When I sat down to watch these two films I did so with an open mind giving them the best shot I could. I thought at least THE GIRL FROM RIO was directed by Jess Franco so that had a fighting chance at being something I'd find enjoyable. I couldn't necessarily say the same about the first film as Frankie Avalon doesn't exactly get my blood pumping but upon sitting down and finishing both films I was pleasantly surprised to find myself enjoying both.

The films are campy, with overacting, scripts full of action and sexy bikini clad villains who can't hit the broad side of a barn with a machine gun. They're imperfect and flawed throughout but they remain charming and simply enjoyable. They're colorful and fun - in a way the Frankie Avalon tie is almost poetic. For movies about taking over the world, with weapons that will turn you into a statue or cause your organs to rot slowly, to maximize the suffering of course, these movies are silly and lighthearted and they work because of it. I won't say I fell in love but I think this is a fun double feature despite the flaws of the films.

The Audio & Video
Blue Underground does a bang up job with the technical side of this release. Both features look very nice with a newly remastered transfer from the original negatives maintaining the original aspect ratios of 2.35:1 and 1.66:1 respectively. Detail levels are high from facial closeups to textures and surfaces such as clothing to walls and doors. Black levels are deep and inky while colors are bright and vivid without being artificially enhanced to "pop" more than they should. Skin tones are mostly very natural and healthy with only an instance or two of a waxy look. On the audio side of things, both films are presented with DTS-HD mono tracks and optional English subtitles. The tracks are crisp and clear with a steady and well done mix. The soundtrack enhances the film but doesn't become overbearing on the dialogue. There's no damage, distortions or background noise.

The Extras
Carried over from the previous DVD of THE GIRL FROM RIO is "Rolling In Rio" a featurette of interviews with director Jess Franco, producer Harry Alan Towers and star of both films Shirley Eaton. There's also trailers and still galleries.

The Bottom Line
These films have given me some hope that the spy genre may in fact hold some gems for me and if they're released in a high quality release such as this SUMURU double feature I'll be much less hesitant to give them a chance. Another job well done by Blue Underground.