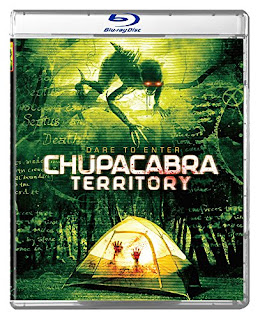 The Film
Urban legends and mythological creatures such as Bigfoot, The Abominable Snowman, Mothman, and Chupacabra are something I've always had fun thinking about, especially Chupacabra. From the first time I heard about the beast in the mid to late 90s on an episode of Unsolved Mysteries I was hooked. I was young, loved horror and this weird beast that had a spiny back, glowing red eyes and drained the blood of livestock through two tiny puncture wounds totally piqued my curiosity. The Goat Sucker quickly became my favorite mythological beast and for several years there was no shortage of stories and sightings around Puerto Rico and the American south kept the beast in the forefront of my imagination.

Heading in to the 21st century it is no surprise that movies involving the creature began to get produced but sadly these films generally lacked any sort of quality and were the worst type of straight to video junk filled with bad acting, weak production values and crappy effects. Worst of all they didn't remind of anything I knew about the creature I had grown to love. Every so often another Chupacabra movie gets made and turns out to be much of the same so I was approached CHUPACABRA TERRITORY with a healthy amount of hesitation knowing that Chupacabra films have generally been shit and it is a found footage film which is incredibly easy to fall in to all sorts of cliches and genre trappings.

CHUPACABRA TERRITORY pleasantly surprised me. Yeah it is a found footage horror film and it definitely feels like it. It has many of the found footage tropes and many horror cliches throughout. There's the typical scene of a girl laying on the ground getting dragged away from the camera (multiple times), there's the scene of something nasty or violent happening in the background of a shot that none of the characters notice, the turn around and BANG! jump scare type moments. They're all present and accounted for. But there's also some really solid performances lead by Sarah Nicklin as Amber, who could be considered the leader of this group hiking in to an off limits area of forest on a hunt for the mythological creature. She's immensely likable and has an infectious energy about her that makes it easy to believe her friends would follow her in to just about any weird situation she'd get them in to. She's the lover and believer of the myth and is willing to go to any length to summon it including getting down and dirty fucking in a tent to get her energy up and performing supernatural rituals.

The film does bring in details in to the mythos of the creature that I have never heard of that I assume were simply to spice up the story and I'm okay with that as I don't think it hurt the story but a more straight forward approach to the creature would have been my preferred avenue. Still, Matthew McWilliams penned a solid script about a creature that has had an absolutely terrible history in the movies and directed a pretty decent Chupacabra horror movie. My biggest gripe is that CHUPACABRA TERRITORY is more supernatural found footage horror film that could have replaced the Chupacabra with almost anything else and been the same movie. That doesn't mean I don't think it's a decent movie and worth checking out for any found footage or Chupacabra fan.

The Audio & Video
Maltauro Entertainment delivers CHUPACABRA TERRITORY on Blu-ray with an attractive anamorphic widescreen transfer. The picture quality is quite good with natural colors and flesh tones and deep, inky black levels that don't show any signs of blocking. The image is clean and crisp throughout. The 2.0 stereo audio track is mixed well and sounds good. It's not a very dynamic mix but for a found footage film it works perfectly. There's no damage or distortions that shouldn't be there. Closed Caption options are available.

The Bottom Line
Though the competition isn't stiff it doesn't change the fact that CHUPACABRA TERRITORY is the best Chupacabra movie to date and is a solid found footage horror film.