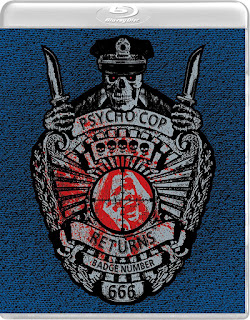 The Film
When the original Psycho Cop movie was released in 1989 the slasher film was on life support and Psycho Cop's underwhelming reception did little to help it but in 1992 the genre had one last gasp of air with Psycho Cop's lone sequel, PSYCHO COP RETURNS where Robert R. Shafer reprises his role as Officer Vickers the killer ex-cop who stalks a group of a office workers who have planned an after hours party in their office complex complete with all the booze your liver can't handle and strippers. Why a bunch of grown men need to party in their place of employment instead of at one of their homes or a hotel room or anywhere that would be more comfortable is beyond me but it makes for an interesting slasher film setting.

It doesn't take long for Officer Vickers to make his presence felt at the party, with a gruesome pencil to the eye murder almost as soon as the booze starts flowing. It immediately lets us know that writer Dan Povenmire has written a screenplay that isn't fucking around and that director Adam Rifkin under his Rif Coogan moniker, is going to let loose and show us the goods in this picture. PSYCHO COP RETURNS is a gleefully violent and gory film letting Robert R. Shafer really sink his teeth into the Officer Vickers role and run with it. Shafer comes up with some great one liners and memorable quotes and his charisma sets him apart from the traditional mute stalk and slash villain. Shafer is perfectly campy which fits the tone of the film to a T. The filmmakers understood the movie they were making and in the special features even admitted they weren't expecting it to be nearly as good as it turned out to be but the outcome was a success when you have a cast that is putting their all in to it, a solid script that flows well and a director who understands that he needs to create a fun film. In 1992 there was really no room for dreadfully serious and dead pan slasher movies, but this one proves that the formula could still work if you create something fun and light. 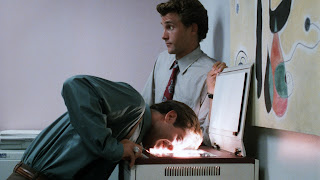 PSYCHO COP RETURNS is precisely that. We may be dealing with grown adults in their late 30s and 40s but this is every bit the exact same movie as the teen summer camp slasher film just replacing the jerky frat boy for a jerky middle aged man and the sexy co-ed who gets hacked up after having sex with someone for a slightly older but no less sexy stripper, including former Penthouse Magazine Pet Of The Month Julie Strain. The tropes and formula are exactly the same but we've traded in our tents for cubicles and dark wooded trails for elevator shafts and it works. Adam Rifkin even gets a bit of social commentary in at the end with a reverse take on the Rodney King beating which is a great scene for the final act of the film.

Perfect it is not but PSYCHO COP RETURNS is a damn entertaining slasher film that makes me upset they didn't role with more sequels for Officer Vickers to appear in. Robert Shafer did sign a contract for five pictures after all... 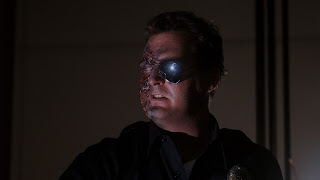 The Audio & Video
Vinegar Syndrome delivers PSYCHO COP RETURNS on Blu-ray with a rock solid anamorphic widescreen 1.85:1 transfer. Clarity is great with a light and natural grain structure and no DNR or digital noise. Colors are a bit subdued with the intentional look of the film taking place in a dimly lit office building at night so they look as they should. Black levels are deep and show no signs of macroblocking or compression issues. Detail levels are high, even in finer details which makes the gory scenes especially nasty. The English audio is presented with a DTS-HD Master Audio 2.0 Stereo mix that sounds crystal clear and has a nice crisp quality. Levels are mixed perfectly so there's no problems with dialogue or music becoming overpowering. English SDH subtitles are included. 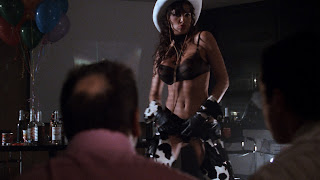 The Extras
-Audio Commentary with Director Adam Rifkin
-"Habeas Corpus" - A 43 minute documentary featuring interviews from the majority of the main cast and crew. This was extremely well done and worth the price of the disc by itself.
-"The Victims Of Vickers" - A 9 minutes featurette with special effects artist Mike Tristano. It's always entertaining to hear how some of the more gruesome moments of these movies are done and this interview is no different. 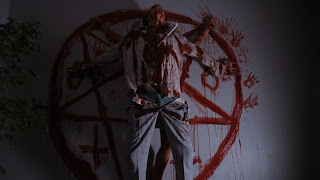 The Bottom Line
It doesn't matter that the first Psycho Cop film hasn't been released on DVD or Blu-ray because PSYCHO COP RETURNS is a fucking blast. Vinegar Syndrome gives this unsung hero of early 90s horror a home in HD and I'm calling a must own for slasher fans.