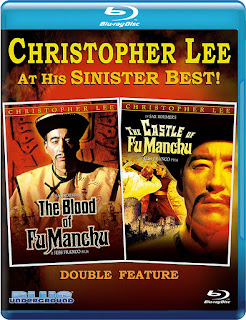 The Films
Harry Alan Towers brought Fu Manchu back to the silver screen after three decades without the Chinese madman who was hellbent on world domination. He put Christopher Lee in the titular role and five movies later Fu Manchu's legacy is that of a schlocky B-movie franchise that is underloved and overly scrutinized.

Yes, the films are campy and flawed but taken for what they are, globetrotting adventure films with far fetched plot devices and grandiose plans that they could never truly fully realize, they offer plenty of enjoyment and entertainment value. Christopher Lee adds a touch of class to the productions as he was never one to phone it in. He cared about the character even if he was a bit miserable playing him due to the makeup effects done to give him a more Asian appearance. His co-star was Tsai Chin who played his daughter and second in command to his power and leadership. Chin is also quite good and gives the film a nice one two punch of villains. Richard Greene plays Nayland Smith, a Scotland Yard agent who has made a career out of chasing his arch rival and putting a stop to his nefarious plans. Greene is passable in his role but a more charismatic actor would certainly have spiced things up and given the audience more of a hero to grasp on to.

THE BLOOD OF FU MANCHU is the fourth film in the series and the first to be directed by Jess Franco. The film follows Fu Manchu, now hiding in South America, as he attempts world domination once again. This time he has discovered an ancient poison found in snakes that he will transfer to the beautiful women he has captured and imprisoned and unleash on the world slowly. One kiss on the lips from these women will result in blindness, paralysis and ultimately death. If his demands are not met he will unleash the full scale version of and wipe out a large portion of Earth's population.

While BLOOD is an entertaining film, it is ultimately messy and filled with too much fat that could have been trimmed. There are characters that don't fit the film and are present for one of the film's several subplots that don't go anywhere. There are scenes that could have been lifted straight from a comedy spaghetti western.  Lee is unsurprisingly the shining star of the film giving a stoic and centered performance. The film has several signature touches of director Jess Franco, most notably sexy women in prison being tortured in some way. I enjoy THE BLOOD OF FU MANCHU but it could have been a tighter film with some editing or a better script.

Jess Franco returns to the directors chair to wrap up the franchise with THE CASTLE OF FU MANCHU from 1969 where Fu Manchu has developed a plan to freeze the oceans of Earth using special crystals which he demonstrates on a smaller scale in the opening scene that features an ocean liner striking an iceberg and sinking in a scene that is eerily similar to some of the scenes in James Cameron's blockbuster Titanic when it sinks. Cameron is no stranger to genre films so it would not surprise me if he had seen this film and set up a shot or two in his film to match that of Franco's sinking ship shown here as a wink and nod to the type of cult films he cut his teeth on.

Christopher Lee is a bit more animated in his performance here and the film as a whole is more visually appealing. The sets feature more colored lighting and detailed dressing and there's no unnecessary subplots getting in the way. It's odd to me that CASTLE is received less positively than BLOOD from the research I've done prior to this review. I think CASTLE is a better film in almost every way. The film ends similarly to how BLOOD ends but we never get the return that Fu Manchu promises in a voice over before the credits roll.

THE CASTLE OF FU MANCHU may not be the neatly wrapped gift under the tree type conclusion to the series that I would have liked to see happen in perhaps one final movie but it is a step up from the previous installment and if this was how the series was to end at least it ended heading in the right direction and on a positive note. The series deserved at least that much.

The Audio & Video
This double feature from Blue Underground brings the final two Fu Manchu films to high definition for the first time but unfortunately the presentations aren't stellar. Both films feature a 1.66:1 anamorphic widescreen transfer. BLOOD is worst of the two films with a soft transfer that mostly fails to impress. While it is an upgrade over standard DVD it is a small one. Colors have little pop to them and the image is overly noisy with digital artifacts. There's a lack of fine detail that makes Blu-ray special and there is a wobble present in a couple of scenes. CASTLE is a bit of an improvement over BLOOD as colors have more life to them and there's a bit more fine detail. The picture is also less hampered by digital noise. Thankfully the audio is great. The DTS-HD Master Audio track features a mono mix, recreating the original English language audio mix in crystal clear HD. There's no issues with crackling, popping or other imperfections or background noise. The sound is crisp and the levels are steady. Dialogue blends well with the score and one never overpowers the other.

The Extras
Special features include "The Rise And Fall Of Fu Manchu" a two part interview totaling half an hour and including footage with Jess Franco, Christopher Lee, Tsai Chin and Shirley Eaton. These interviews are quite an enjoyable listen with plenty of good insights and anecdotes. Also included are original theatrical trailers and a poster and still gallery.

The Bottom Line
These are two entertaining cult films that are underrated and I recommend current fans or anyone with a curiosity towards Fu Manchu pick up this double feature.