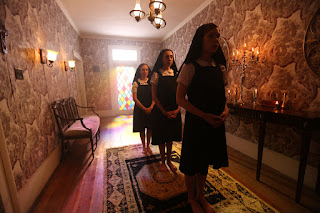 “We’re very excited to introduce Darren’s latest masterpiece to buyers at the American Film Market this week,” said Campbell.  “This is exactly the type of project our clients have been looking for – a female-driven, elevated genre film with pedigree that is well-crafted throughout. We’ve seen huge successes in this arena lately, most recently with Hulu’s “The Handmaid’s Tale.”  From the writing to the acting to the directing and execution – ST. AGATHA is a cut above anything that I’ve seen in a long time.”

“I have always been attracted to the dark, sinister, and macabre,” said Bousman.  “But, as I find myself getting older and now being a dad, blood and guts no longer amuse me.  I need something more.  I look for content, character and themes.  ST. AGATHA spoke to me as it takes a look at the unflinching horrors that befell women in the 1950’s and how that parallels to the not so different horrors that are befalling them today.  It was amazing to work with such a strong female cast, and I look forward to pulling back the curtain and letting others glimpse into our sinister world.”

ST. AGATHA is set in the 1950s in small town Georgia, where a pregnant con woman named Agatha is on the run and seeks refuge in a convent hidden in deafening isolation. What first starts out as the perfect place to have a child turns into a dark layer where silence is forced, ghastly secrets are masked, and every bit of will power Agatha has is tested. She soon learns the sick and twisted truth of the convent and the odd people that lurk inside its halls. Agatha must now find a way to discover the unyielding strength needed to escape and save her baby before she's caged behind these walls forever.

“Making this film was amazing,” said Michaels.  “The intensity of the film will keep the audiences holding onto their seats until the end.  Under the direction of Darren Lynn Bousman, we had strong female actors who embodied not only their characters, but also the era in which the movie took place, the atmosphere as well as the eeriness of the story.  To see the film from the inception of the script through the process of finding an investor, to preproduction, to principal photography and finally to the finished product was an amazing experience.  I am very proud to be a part of this project.”
Posted by Celluloid Terror (Seth Poulin) at 12:46 PM