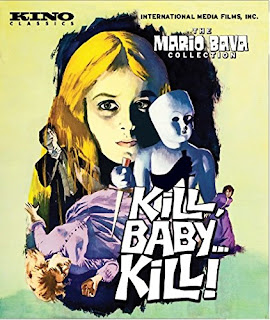 The Film
Mario Bava is the Godfather of Italian horror and perhaps genre cinema in general. He made a huge splash with gothic horror films during the 1960s including the chilling slow burn ghost story KILL, BABY... KILL! This 1966 film stars Giacomo Rossi Stuart as a doctor summoned to a small Italian village to perform an autopsy on a recently deceased woman but finds that superstition and fear run deep among the population of this village and that the spirit of an undead girl and madness are the reason.

KILL BABY KILL is another fine example of Bava's mastery behind the camera. From his ability to create mood and atmosphere using the centuries old villas and colored gel lighting to the cinematography which he did partially himself along with frequent collaborator Antonio Rinaldi and was how he cut his teeth in the film industry before getting a chance to direct his own films, he oozes style and ability. Bava's attention to detail even went as far as finding exactly the right person to play the role of Melissa, the vengeful spirit and when he couldn't find a girl that fit his vision he cast a young male with these striking and protruding eyes. His storytelling here is simple, and Giacomo Rossi Stuart proves to be a capable and likable protagonist who investigates the strange dealings of the village and their fear of a ghostly apparition. His relationship with Erika Blanc provides a deeper and more personal motivation for the character to find out the true nature of this village's fear and the duo have strong chemistry.

It's all about the visuals though and Bava provides plenty of them. From Melissa's stony eyed gaze as she peered through windows at her next victim to the graveyard swing shot from her point of view as the camera plays with the audience. And there's something to be said about how effortlessly creepy the bouncing ball scenes are particularly as the child's toy bounces through an open door and across a corpse awaiting autopsy. The film brings chills in very simplistic ways but that is just a testament to Bava's ability as the film is never boring despite its methodical pace. This small world we're brought into a long with Stuart's Dr. Eswai is both mad and engrossing from the crowd that frequents the bar and the inn to the reverse gravediggers who want to buy bodies in a hurry as opposed to the typical characters we see digging them up and the haunting Baroness Graps, there's always something or someone worth paying attention to.

The 60s were the decade that Mario Bava became a name. He made three of his best films in the first half of the decade and while KILL BABY KILL isn't the film that Black Sabbath (1963), Black Sunday (1960) or even The Whip And The Body (1963) are, it is a fine example of a gothic chiller and a genuinely well made and effective horror film. Bava spent time in just about every genre you can think of but his gothic horror films may be his finest work. Or maybe they're second to this gialli... I'll let you decide for yourselves but be sure not to overlook KILL BABY KILL.

The Audio & Video
Kino Lorber delivers KILL BABY KILL on Blu-ray with a new 2K scan taken from 35mm film elements. The 16x9 anamorphic widescreen transfer retains the film's grain structure and there's no signs of digital noise reduction or edge enhancement. There's speckling throughout but it never becomes intrusive or excessive. Colors are strong with deep black levels and detail is definitely improved over previous DVD releases of the film. This release features Italian and English Dolby Digital mono audio mixes. There's no hiss or distortion but some light organic, natural background noise is present. Both audio tracks sound very good and I have no real complaints about them.

The Extras
-Audio Commentary With Tim Lucas author of the be-all end-all Mario Bava tome All The Colors Of The Dark
-"Kill Bava Kill" - A 2007 documentary on the production of the film with Mario Bava's son Lamberto Bava who served as Assistant Director on the film. This was previously unreleased and clocks in at 25 minutes and is a tour of shooting locations and filled with good memories from the production.
-German title sequence with alternate footage
-Interview with actress Erika Blanc
-International theatrical trailer
-TV Spots

The Bottom Line
Mario Bava is one of the greatest cult filmmakers of all time and his horror output can stand up to any other director's filmography and KILL BABY KILL is a strong part of his catalog and should be a strong part of your collection - Highly recommended.