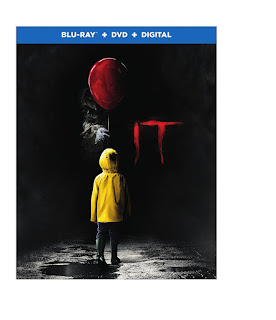 The Film
The small town of Derry, Maine is plagued by a rash of disappearing children, similar to events that happened 27 years earlier. A group of ragtag kids, lead by Bill whose younger brother Georgie is amng the missing, encounter a sinister shapeshifting monster named Pennywise who stalks the children in his preferred form of a clown. The kids try to uncover the truth of Pennywise and the disappearances without winding up on a missing poster themselves.

Based on the novel of the same name by Stephen King, IT is the first feature film adaptation of the story but not the first screen adaptation as it was turned into a two-part miniseries in 1991. That miniseries has attained a bit of cult classic status over the years, largely based on Tim Curry's memorable performance as Pennywise. That adaptation was heavily flawed, especially in its second half and the ending of it is much maligned. That hasn't stopped it from heavy rotation on cable and a huge fanbase. This feature film version of the story was in the works in one form or another for half a decade, going through several changes at director. Finally in the summer of 2017 IT arrived in theaters and would wind up becoming the highest grossing horror film of all time (not adjusted for inflation).

Plenty of bad movies make loads of cash at the box office though and with already having a shaky screen adaptation it's reasonable to ask if IT was any good. I'm here to say that yes, IT is in fact a well done adaptation and horror film. While it changes some of the source material and if you're at all familiar with the source material you're well aware that there are just some scenes that simply will never make it in to an adaptation. That's okay, it doens't hurt anything. The most important part of the movie is the kids. Without a group of kids that turn in good performances and give the audience a reason to connect and care about them the movie fails on its most important level. This is the film's best aspect. The cast of kids led by Jaeden Lieberher as Bill, Sophia Lillis as Beverly and Finn Wolfhard (Stranger Things) and Richie, they each bring a distinct personality to the group but are a wonderful ensemble together. Their chemistry is entirely believable and natural. It's easy to connect with them and be taken back to our own childhoods. If there's one thing I wanted more out of the kids was more backstory for each of them as a couple get glossed over and lost in the shuffle a bit even at the film's two hours and fifteen minute run time.  There's still time to bring more of their backstories out in the inevitable sequel so I'm not holding it against the film too much. Bill Skarsgard is effectively creepy and menacing as Pennywise. His facial expressions and line delivery bring are memorable but there is an over reliance on CGI effects and scares which don't always look great and at times it does cheapen the overall quality of the movie with tired cliches.

IT has a strong screenplay and script however and has a stunning look. The late 80s setting is recreated brilliantly and brings back a sense of nostalgia. That sense of nostalgia is a driving force in the film but never gets too heavy handed. It teleports us back to a time when we were young, adventurous and vulnerable. That's why it works and while it may not match the darkness of the novel we will be getting a sequel that could certainly bring a darker tone and more serious scares but even if history repeats itself and the second half falls flat as it did with the 1991 adaptation IT is a self contained horror film that works perfectly on its own as it hopefully works as a great first half to a great second half. Only time will tell but IT will still be a very good horror movie either way. 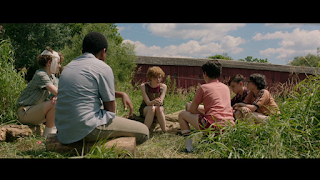 The Audio & Video
Warner Bros Blu-ray release of IT looks and sounds as good as you could possibly imagine, as it should. The film's anamorphic widescreen 2.40:1 aspect ratio is super wide and gorgeous with no signs of edge enhancement or DNR. The colors are vibrant and natural with incredible levels of detail from textures and fabrics to faces and body closeups. The black levels are very deep and inky with no trace of blocking up. I don't think I could ask for a nicer Blu-ray presentation while the Dobly TrueHD 5.1 surround mix sounds exceptional and free of any flaws. It really is that simple to describe as the audio sounds perfect. There's not a single instance of distracting background noise or staticy damage. Five stars, ten out of ten, I'm on board with whatever you want to consider the perfection of this disc. 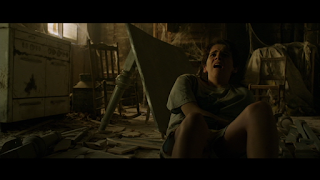 The Extras
There are four featurettes that are all worthwhile and clock in around 15 minutes (give or take a minute or two). There's no throw aways here.

-"Pennywise Lives" - A look at how Bill Skarsgard prepared and performed the iconic character including how he saved the production from having to use CGI effects with his eyes and face. This is my favorite supplement on the disc.
-"The Losers Club" - A featurette focusing on the relationship of the kids in IT and how their friendship. The kids' relationship makes the film what it is and this feature documents how real it is. It's hard to watch this without a smile on your face.
-"Author Of Fear" - An interview with Stephen King as he hashes out his history with the IT story including the history of writing it and how he came up with various aspects of the story.
-Deleted Scenes - Things the movie didn't need but maybe could have used...and maybe not. 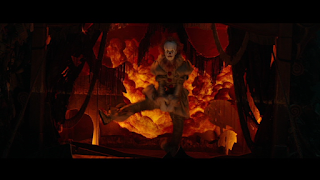 The Bottom Line
IT isn't perfect but it hits the right notes to be a fun, nostalgic and whimsical horror tale that lives up to the novel it was based on. Recommended.

IT is avaiable HERE