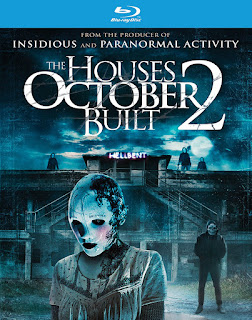 The Film
Have you ever been surprised by how much you like a movie? I'm sure you have, we all have. I was incredibly surprised by how much I enjoyed Bobby Roe's 2014 found footage horror film The Houses October Built. This found footage horror film followed a group of friends going cross country in their RV documenting the most extreme haunted houses they can find until they come face to face with a secret haunt that takes them to their absolute extreme and blur the line of entertainment and reality. So when I heard a sequel was made I was caught off guard but totally game to check out THE HOUSES OCTOBER BUILT 2.

And then I watched it.

THE HOUSES OCTOBER BUILT 2 is lazy. It retreads the same ground laid in the first with the same plot. The same friends get together to go to some haunts and capitalize on their internet fame after the events of the first film. Except they're all incredibly shitty people this time around more worried about making a couple bucks instead of their own friends mental health. Brandy suffered the worst fate of the first movie and her shitty friends do everything they can to bribe her to join their trip because she's the pretty girl all of the haunts want to promote their attraction and without her the group is worthless. So her friends throw her in to increasingly extreme haunts despite her protests to do the extreme haunts. Of course she gives in when a few more dollars are thrown at her so we get to hate her too. This is where the film fails but definitely isn't the only place. If we're forced to spend 100 minutes confined mostly to an RV with this group of people they better be likable folks and in the first film they were but this time they've devolved into typical pieces of shit more concerned on a quick buck and exploiting their friend than a love of haunted houses and Halloween.

The film is also victim to just about every pitfall a found footage style horror movie can fall for. The added music, slick editing and basic set up of movie doesn't make a lick of sense for something being shot on the road and supposedly "found" and uploaded to Youtube. The first film did this as well but was fun enough that I could mostly overlook it but when the movie is a bad time, and I mean that it is a bad time. It's like being at a shitty party with people you barely know who are annoying the absolute piss out of you and you have no way to get home or leave, when it's that bad of a time the things you can nitpick begin to add up and then the laziness of the film shines through and it's like being blasted in the face with a nasty fart.

I loved the first. I loathe the sequel.

The Audio & Video
THE HOUSES OCTOBER BUILT 2 has been brought to Blu-ray by RLJE Films and looks fantastic with a 1.78:1 anamorphic widescreen transfer. The color palette is vibrant while shining and popping just enough. The black levels, of which there's plenty in the haunt interiors, are deep and inky. Detail levels are high and skin tones natural with no signs of edge enhancement or DNR. The audio is presented in a 5.1 DTS-HD Master Audio mix that sounds just as good as the picture looks. The audio is warm and full bodied with a strong mix throughout. There's no damage or hiccups to speak of.

The Bottom Line
It's a colder, less genuine, lazy and boring rehash of the first. Skip it.