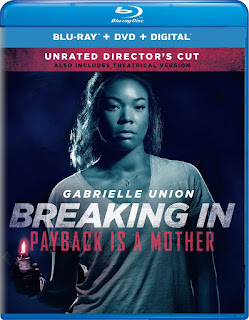 The Film
After the recent death of her father a mother (Gabrielle Union) brings her kids to his sprawling estate to prepare it for sale but find that the house is already occupied by a group of criminals looking for the safe they believe is hidden and full of cash. With her family in mortal danger Union must fight back to save their lives.

Let's start with the good, shall we? Gabrielle Union is pretty decent here, capable of handling the physical and emotional sides of her character well. The on-location shooting at a real house gives a sense of realism to the film even if the house is an absolute mansion compound with state of the art of security that no normal person could ever dream of affording. Director James McTeigue makes good use of the location. Otherwise the film sets itself up to be a digestible slice of Hollywood despite being something unremarkable or particularly memorable and that is perfectly fine. Not every movie has to be groundbreaking or a new spin on a genre. BREAKING IN, for the first half of the film was on its way to being that.

And then the bottom dropped out. 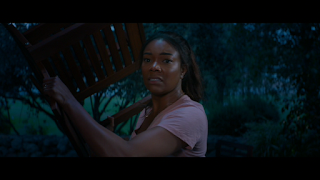 The second half of BREAKING IN is a train wreck filled with plot holes the size of the Grand Canyon, editing that if I called it sloppy I'd be extremely kind and forgiving because it is really just plain awful, performances from the cast that are simply not good but to be fair that's really due in part to the writing at this point as well. The entire movie asks you to overlook so many inconsistencies for the sake of convenience for itself and the situations it wants to set up that it is downright insulting.

Cookie cutter isn't necessarily a bad thing. I like when my cookies are the same size and I know what to expect when I bite in to them. You won't win any fancy awards or be the next big thing making cookie cutter cookies but you can at least make a product that the party will enjoy. BREAKING IN is the equivalent to biting into a cookie and finding out that chocolate chip is actually a cockroach and nobody wants to eat a cockroach.

The Audio & Video
Universal's Blu-ray of BREAKING IN is gorgeous. The 1080p presentation looks stellar, with deep, inky black levels that show no signs of compression or blocking issues. Colors are vivid and lifelike while detail levels are very high including finer detail like facial hair and surface textures. The audio is crisp and clear with a strong mix across the 5.1 lossless audio mix. From a technical standpoint this release is top notch. 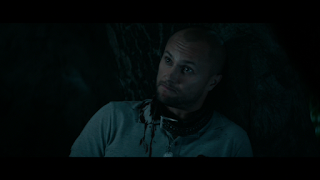 The Extras
There are several featurettes included in the release taking us behind the scenes to look at various aspects of the filmmaking including Gabrielle Union's performance and her role as a protective mother, James McTeigue's direction and use of the real life location the movie was produced in and the film's action scenes. Also included is an alternate opening and deleted and extended scenes each with optional commentary from the director and a full length audio commentary track from the director and writer. 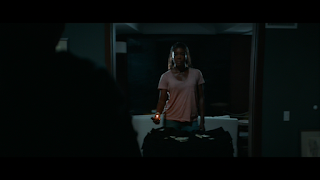 The Bottom Line
BREAKING IN had the potential to be a standard but altogether successful home invasion thriller but it completely falls apart and descends into the type of movie that if you're not rolling your eyes at it you're simply staring wide-eyed at the screen in amazement of how ludicrous what you're watching is.

BREAKING IN is available HERE
Posted by Celluloid Terror (Seth Poulin) at 12:13 AM