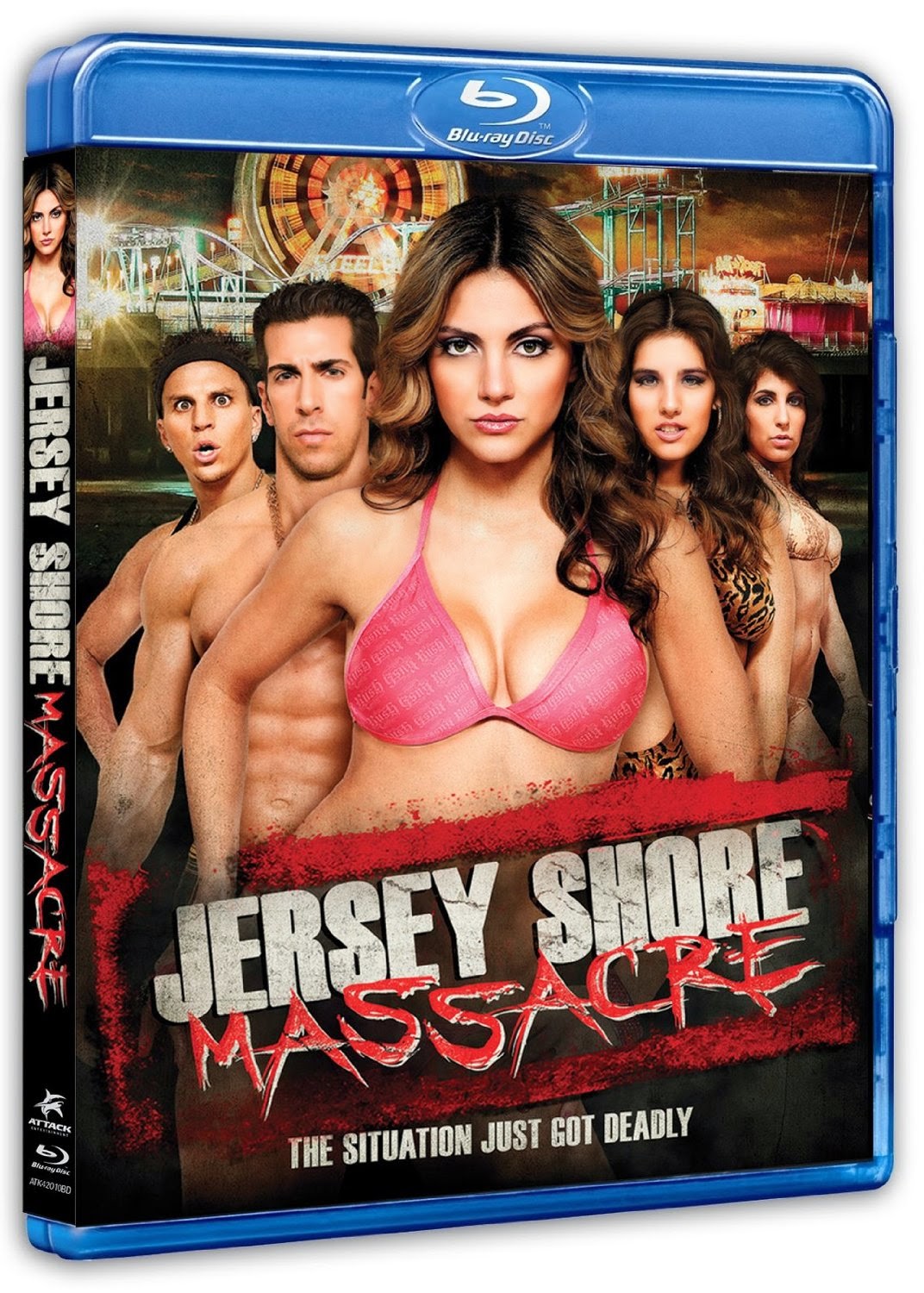 The Film
When a group of shore girls lose their rental in Seaside Heights thanks to the mix up of a stoner landlord (Ron Jeremy) they end up at Teresa's Uncle's cabin in the Pine Barrens. With nothing else to do they go on a Jersey Devil tour along with a few Star Trek nerds and some hillbilly locals. After realizing they're miserable they head back to the beach to pick up some guys to bring back to the cabin and party with. When they return a mysterious masked killer begins dispatching of the guidos and guidettes in various brutal and gory ways.

It is no secret that the culture of spiky haired, fist pumping guys, and their female counterparts has become a bit of a pop culture phenomenon in recent years with television shows such as Jersey Shore and various spinoffs and copycats gaining huge ratings with young adult audiences. It also lead to spoofs of the culture popping up everywhere and while some of these are funny like the film Jersey Shore Shark Attack, most are just as lame as the shows they're making fun of. Surprisingly JERSEY SHORE MASSACRE winds up being a pretty decent slasher film. Even more surprisingly the whole Jersey Shore angle didn't annoy the piss out of me. The cast is solid top to bottom, delivering the right amount of camp in their performances without getting too silly. There's also plenty of blood and guts being spilled on screen with some pretty good special effects and makeup.

JERSEY SHORE MASSACRE does drag in spots, even at its brief runtime but surprisingly a film made by JWOWW Productions wasn't terrible. Writer/director Paul Tarnopol seemed to really understand the built in humor with the type of characters and culture he was making a movie about and did a good job with it. JERSEY SHORE MASSACRE is worth a watch from fans of campy and cheesy horror movies but I wouldn't call it a classic or essential viewing. It is simply a surprisingly decent anomaly of Jersey Shore spinoffs.

The Audio & Video
Attack Entertainment's Blu-ray of JERSEY SHORE MASSACRE features an attractive anamorphic widescreen transfer with rich colors and strong detail levels. The plentiful reds in the color palette are vivid and skin tones are fleshy and natural without appearing waxy from digital scrubbing. The 5.1 audio track sounds good with a solid job done on mixing levels. There's no background noise or audible hiccups to distract the audience.

The Extras
-Fat Camp Massacre part 1 - A short slasher movie with in a movie that is pretty hilarious.
-Behind The Scenes - 24 minute "making of" style documentary that is full of laughs
-Bigfoot Unmedicated
-Italian Ice "Melt" music video
-King Nyne music video

The Bottom Line
JERSEY SHORE MASSACRE manages to go beyond its ties to recent pop culture obsession with the Jersey Shore culture and is a competently made, cheesy slasher film. Slasher fans should definitely give this one a look.