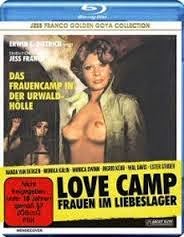 The Film
A group of beautiful girls is kidnapped by revolutionaries and taken to a jungle camp to serve as sex slaves for the revolution. The girls are forced to comply or they are tortured or killed by the sadistic warden. When one of the leaders of the revolution falls in love with one of the girls they try to escape for a life together.

LOVE CAMP is a classic example of Jess Franco tackling just about any genre that is hot at the moment and the Women In Prison genre was hot in the late 70s. Franco makes a pretty satisfying piece of exploitation either way, with plenty of flesh on screen. There's shower scenes, love scenes and a bit of violence. Had Franco went further with the violence and shown it explicitly I think LOVE CAMP could have rose above the pack and became a classic example of the genre. As it is, LOVE CAMP is pretty middle of the road WIP.

The Audio & Video
Yet another outstanding Blu-ray from Ascot Elite. The anamorphic widescreen transfer is gorgeous, with great sharpness and vivid colors. There's no edge enhancement and DNR is not excessive while skin tones are natural and healthy. The English DTS-HD 5.1 track sounds very good. The mix is strong and levels are complimentary to each other. There's no background noise. German and French tracks are also available with optional English and Japanese subs.

The Bottom Line
A missed opportunity to be a classic ends up as something that will entertain the viewer but doesn't reach its full potential. LOVE CAMP is absolutely worth checking out for what it is instead of skipping for what it isn't.