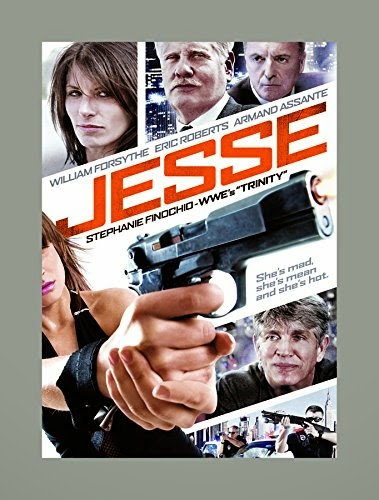 The Film
Jesse is a cop who likes to drink away her problems which are based around her failed marriange and her husband who has custody of her kids because she's a pretty terrible person. Jesse's brother is killed by the mafia after he owed them thousands of dollars so Jesse does what she has to do to take down the people responsible.

This movie is a joke right? Where is Ashton Kutcher to pop out of my closet and yell at me tellling me I was punked? JESSE is fucking awful on every level. Every single character in this shit fest is a stereotypical New York loud mouth Italian caricature that you'd find on some shitty reality show. It's fucking ridiculous. Jesse is the least likable protagonist I've seen in a film in quite a while. Her attitude sucks, her personality is loud, self righteous and arrogant. On top of that she's just a major bitch. The acting in this thing seems like a contest of who can put on the strongest accent and overact the shit out of it. It was to the point where every line of dialogue processed through mind as "AY YO BUDDY! I'M FROM LONG ISLAND! YOU GOTSA A PROBLEM OVA HERE!?"

It's all good though because we care about the vengeance on the mafia right? No, no we don't In fact there isn't a single fucking thing to care about in this movie that is pretty much based on the notion that all cops and firefighters hate each other. Oh and Jesse's mother? Yeah, she holds up a gun to a little dog's head at one point to stop an argument. JESSE is filmed on shitty cameras, it is framed poorly half the time and edited like a Skinemax flick. Hell, even the opening credits look like a shitty made-for-TV movie fro the 90s. That's not fair to made-for-TV movies as I think every single one of them would be better than this bullshit.

The Audio & Video
The DVD from Arc Entertainment looks good enough given how it was produced. The 16x9 anamorphic widescreen transfer is attractive and is clean. A decently sharp picture overall with nice colors. The audio is hit or miss as there are times the audio is so poorly recorded that it barely registers in the mix. That is a problem with the production of the film and not the authoring job done on the disc. Otherwise the Dolby Digital track sounds okay.

The Extras
Bare Bones aside from a VUDU digital copy.

The Bottom Line
I'd rather be stuck in some weird reality where I repeatedly poke myself in the eye repeatedly than watch the steaming pile of dog shit that is JESSE, ever again.