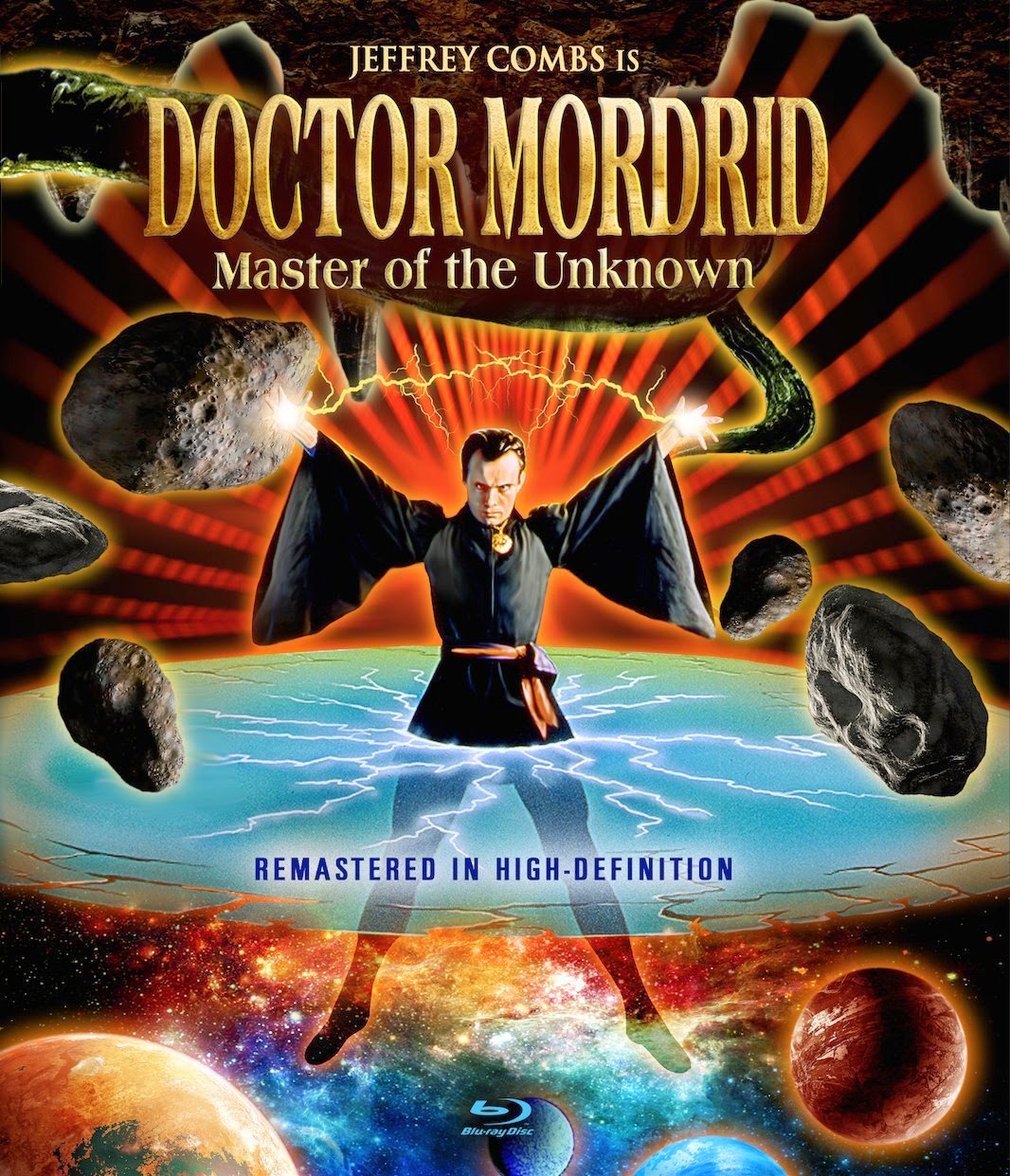 The Film
DOCTOR MORDRID is the story of two rival sorcerers and their long running battle over Earth. Mordrid has sworn to protect Earth from Cabal who wants to turn the planet it a burnt pile of nothing. Cabal sends his minions to distract Mordrid while he works on freeing the demons from the Fourth Dimension who are locked away and patrolled by Mordrid's friends to help with his plan of destroying Earth. Mordrid and his neighbor who works for the police department must rush to stop Cabal from getting the Philosopher's Stone, the final piece Cabal needs to unleash hell. The museum that houses the stone turns into a battleground between two experts in magic.

DOCTOR MORDRID is one of the most underrated Full Moon films there is. It moves incredibly fast and is ridiculously entertaining. Jeffrey Combs takes the cheeseball movie and turns in a fantastic performance, as he has done numerous times in his career. He's a brilliant genre actor, one of the best this generation has to offer. There's some fun early 90s special effects which are obviously dated but still bring a smile to my face. The Band family (directed by Albert and Charles and scored by Richard) do a great job making a movie that far exceeds its budgetary constraints in terms of fun and quality. The stop motion animation is awesome and the battle between the T-Rex and the Mastodon is one of my favorite scenes in Full Moon history.

There's no secret that Full Moon isn't high art but DOCTOR MORDRID was made during the years I like to refer to as the "Golden Age" for Full Moon which I think ran until about the mid-90s. This time period had some fantastic B-movies being released from the company and MORDRID is one of the best.

The Audio & Video
In comparison to the old DVD put out by Full Moon this new Blu-ray is a revelation. The film is finally available in an anamorphic widescreen print and features great PQ. The detail level is high, especially in skin tones and textures. Colors are vivid and vibrant while remaining realistic and not overly enhanced. There's a few instances where the film is a bit soft but they are few and far between. There's no signs of edge enhancement or DNR. Two audio options are available, a 5.1 surround track and a 2.0 stereo track. The 2.0 track sounds good with no hiccups or background noise or damage to the track. The very good soundtrack by Richard Band is mixed beautifully with the dialogue to compliment the film.

The Bottom Line
Full Moon has done a great job with the majority of their Blu-ray releases and DOCTOR MORDRID is no exception. It is one of the most underrated films from Full Moon and it finally has a home video release that does it justice.

Do you know if the videozone on the Blu-Ray is the full 30 minute version, as seen on the VHS? The DVD only had the 10 minute behind the scenes portion of the videozone.

It is the shorter version unfortunately.