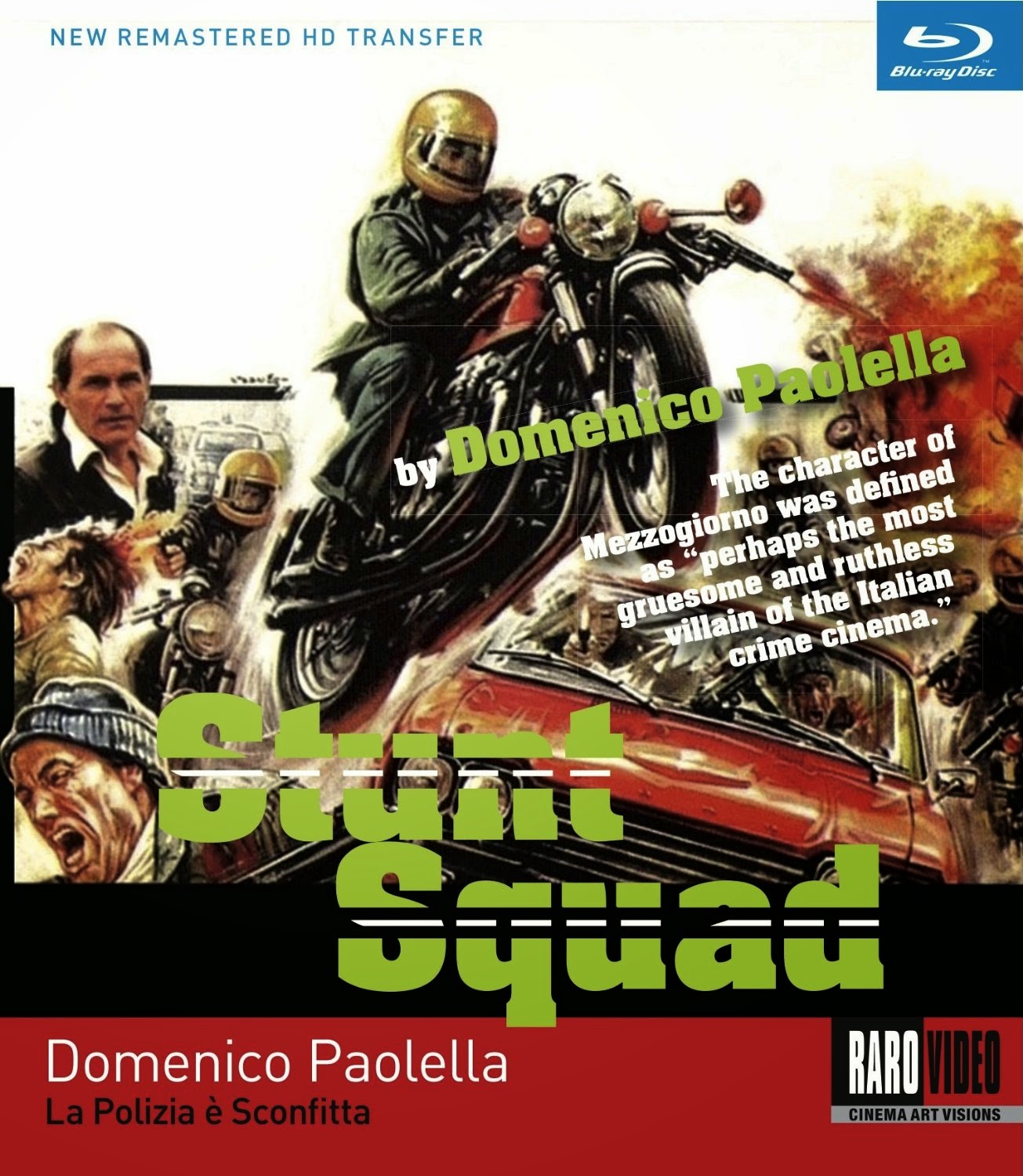 The Film
Shopkeepers and businesses are being extorted and forced to pay for protection by a crime ring in Italy. Bombings, shootings and other forms of violent crime are way up and the crime bosses are taking advantage of it. The normal police force is unable to do much of anything to stop it so they secretly train a special squad of officers known as The Stunt Squad. This special unit is trained in dirtbike pursuits, shooting from moving vehicle and while performing acrobatic stunts among other special skills that will help them bring down the crime rings being run by the ruthless Valli. The pursuits on Valli prove deadly for not only the police and the crime rings but innocent bystanders as well. The public has had enough with living in fear and make their move when the police have Valli cornered.

THE STUNT SQUAD features some of the most extreme and nasty violence in any Euro crime film I've seen to date along with some exciting chases and ridiculous training sequences. The film's title may be a bit misleading as the Stunt Squad doesn't show up until about halfway through the film and there is quite a bit of social commentary about that particular time in Italy. The title is a bit lighthearted for what the movie holds but the story is a good one and the direction from Domenico Paolella gives us some great action scenes. Vittorio Mezzogiorno steals the film as Valli and the scene in his hideout/home with his birds is purely brilliant. I have read that Valli may be the most vile character in all of Euro crime films and I think he certainly would be in the discussion at the very least.

A review of THE STUNT SQUAD wouldn't be complete without mentioning the score by Stelvio Cipriani which is quite good and allows the viewer to groove through the city streets with it. Cipriani was one of the best at scoring genre films and he didn't slack off here.

The Audio & Video
Raro Video gives STUNT SQUAD a home on Blu-ray with a 16x9 anamorphic widescreen transfer. Overall the transfer is pretty good. Detail level is pretty strong while colors are realistic in their presentation. Sharpness is above average though there are some moments of softness and unremarkable visuals. There's also a bit of ghosting early on in the film. There are two audio options, Italian and English, both 2.0 tracks. The Italian track features English subtitles and while I think it sounds slightly better than the English track with a bit better and fuller mix the subtitles are awkward to read as they seem to have been translated literally and not fixed to read properly in English. The English track which is how I watched the film after finding out about the subtitles is still good, a bit thinner than the Italian track but it is clear, and free of background noise. The levels compliment each other nicely.

The Bottom Line
Crime film fans, especially those who prefer the Italian crime film variety will want to add STUNT SQUAD to their collection. A decent transfer for a film packed with violence and excitement should sell fans of the genre quite easily.

STUNT SQUAD is available HERE
Posted by Celluloid Terror (Seth Poulin) at 11:56 AM