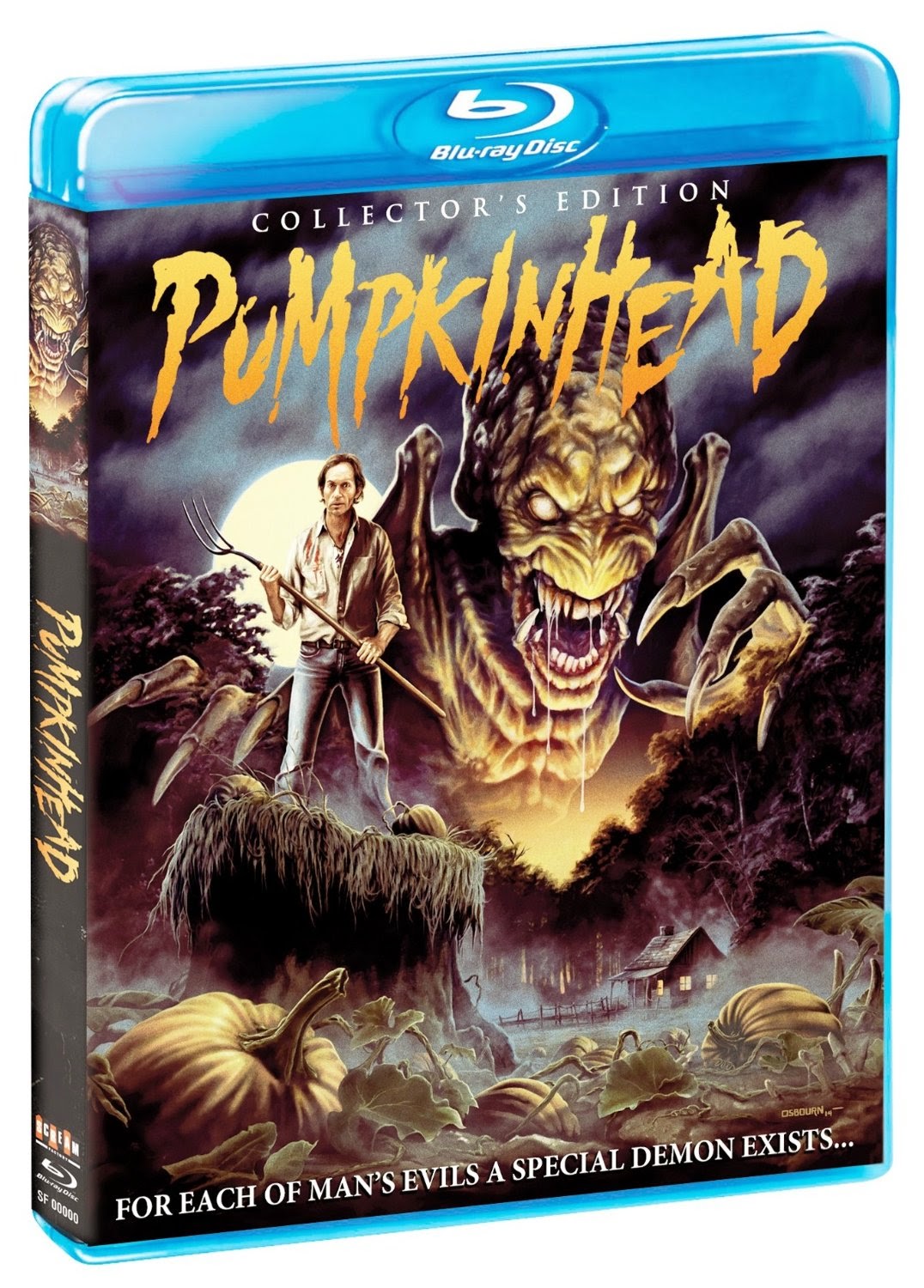 The Film
A group of teens bring their dirt bikes to Ed Harley's (Lance Henriksen) store to get supplies for their trip. They decide to start riding right there in the field next to the store and after drinking a bit one of them runs over Harley's son. Most of the group scrambles, leaving the boy for dead. Harley is angered and devastated and decides to pay a visit to a witch to summon the local myth known as Pumpkinhead. Pumpkinhead is a creature that will take vengeance for whoever summoned him and can't be stop until the deed is done. As Pumpkinhead terrorizes the kids Ed Harley realizes that two wrongs don't make a right and tries to stop the beast himself knowing that the vicious attacks from the monster won't bring back his son or help bring closure.

PUMPKINHEAD only gets better with subsequent viewings. I love this film a little more every time I see it. Stan Winston isn't known for his directing like he is for his special effects but he does a fantastic job with this film. The atmosphere created with set pieces and lighting is thick and moody. The acting is very good from top to bottom with Henriksen giving one of his best performances of his career. PUMPKINHEAD is as much a morality tale as it is a horror film but it is very much a horror film. From the hulking 7 foot plus stature of the creature to his penchant for dispatching of his victims with violent and brutal style to the spooky witch that can awaken the Pumpkinhead fetus this movie is creepy and a bit disturbing.

It's also beautiful visually and emotionally. The sets, from the creaky shacks in the woods to the burial mound covered in moldy, rotten pumpkins this movie has a very distinct look. At times it is very humid and dusty then it almost feels like a frigid Autumn night. The story of Harley and his son and then Harley's emotional turn really draw the viewer in from different angles. There are some very likeable characters that we want to survive and then there are others that we don't mind watching Pumpkinhead handle with vigor. PUMPKINHEAD is awesome.

The Video & Audio
Oh Scream Factory, thank you so much. PUMPKINHEAD shines in this new Collector's Edition Blu-ray.  The 1.85:1 anamorphic widescreen transfer has great clarity and sharpness. You can almost feel the wind in the woods or the dust in the earlier scenes at the store. A lot of this film takes place in very dark locations and the black levels are handled brilliantly on this disc. Colors are represented with lifelike realness and don't look at all artificial. Skin tones are show great detail and not a hint of waxiness. The DTS-HDMA Stereo audio track is mixed perfectly and is crystal clear. No background noise or audio damage to speak of.

The Extras
This disc is packed. Packed I tell you!
-"Pumpkinhead Unearthed" - A documentary on the film clocking in at over an hour long!
-"Remembering The Monster Kid" a 45 minute tribute to Stan Wintson and Alec Gillis
-Audio commentary with Gary Gerani, Tom Woodruff a
-"Night Of The Demon" with Richard Weinman
-"The Redemption Of Joel" with John DiAquino
-"The Boy With The Glasses" with Matthew Hurley
-Demonic Toys featurette on the making of PUMPKINHEAD toys
-Theatrical Trailer
-Still Gallery