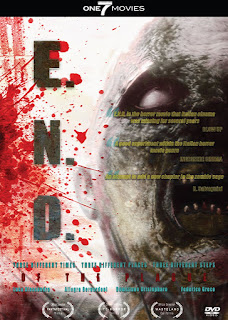 The Film
Day 0:  The Outbreak starts from a batch of bad cocaine
Day 1466: Italy is in ruins as the epidemic is only getting worse.
Day 2333: There are humans and there are monsters and there isn't a lot of difference between the two.

E.N.D is a quasi-anthology horror film taking place in three different periods of a zombie outbreak caused by bad cocaine. The 80s would have been hell with this coke. The first entry takes place inside a funeral home just at the start of the outbreak. Dull describes this entry fairly well. A miss opportunity at funeral home hijinx the night after the mortician held a party with his friends there.

Follow that up with the fight for survival as an American soldier and pregnant woman board themselves up in a wooded cabin as the zombies chase them and try to break in the woman gives birth leading to an interesting finale. Some action and suspense make this one a mildly entertaining chapter. 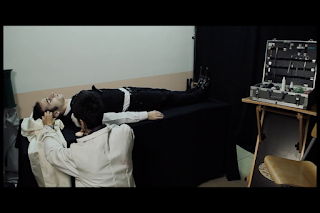 And finally after over six years of the outbreak the zombies have evolved into a communicating, functioning group of monsters, making their extinction by humans that much more difficult. The most interesting chapter of the bunch if not significantly flawed in various areas. Easily the most action and gore packed section of the movie.

E.N.D. isn't great. There are a lot of slow spots that just drag out to nothing, the effects are cheap and the CGI is awful. There's also some practical effects that look good and zombie makeup that is a throwback to the 70s and 80s reminding me in particular of the ghouls from Oasis of the Zombies and Zombie Lake. The acting, like the rest of the production is amateurish, and clunky. I appreciated it for being a coherent film with an interesting take on an increasingly dried up, dull and lazy subgenre.

The Audio & Video
E.N.D. finds its way to DVD courtesy of One 7 Movies with a 2.35:1 anamorphic widescreen transfer. The digital photography looks okay, with a soft but clean image quality. The PQ is middle of the road, nothing great but not notably poor either. The 2.0 Italian language audio features optional English subtitles. The audio is mixed well and is reasonably full bodied. Levels are steady and there's no distortions or hiccups in the audio. The English subtitles are timed well and read fine but any time there is a break in dialogue the subtitles of the last word spoken hangs on the screen until someone else speaks. It's not very distracting once you realize it is going to happen every single time, and sometimes that break lasts several minutes but it is a lazy over sight. 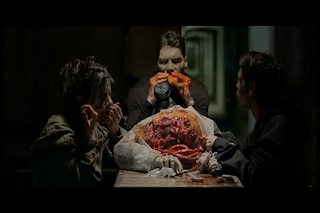 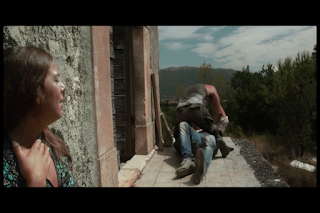 The Bottom Line
Recommended for zombie superfans only.

E.N.D is available HERE
Posted by Celluloid Terror (Seth Poulin) at 11:38 AM