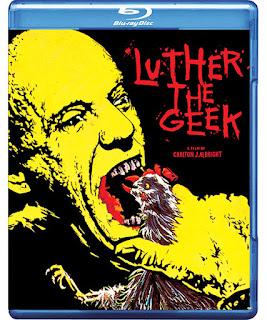 The Film
As a young boy Luther sees a carnival sideshow act of a "geek", a down on his luck beggar that attracts crowds by biting the heads off of live chickens in exchange for booze. Luther curiously tastes the chicken blood that has splattered across the stage and instantly develops a taste for it. Years have gone by and Luther is up for parole after a long history of violent crimes and he's developed a taste for human blood. Immediately upon his release he attacks a person with his set of metal teeth he has fashioned for himself and hides out at a secluded farm house terrorizing the three inhabitants and playing a game of cat and mouse with the local sheriff.

LUTHER THE GEEK was originally picked up for distribution by Quest Entertainment but never got the release it deserved and largely languished in VHS obscurity until Troma released it on DVD in 2005. I had never heard much chatter about the film so when the opportunity came up to review this Blu-ray I was intrigued to finally see it. Simply put, I wasn't totally ready for what I was in for. 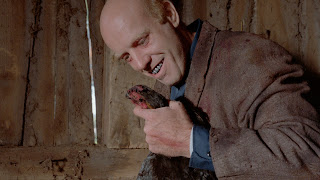 This film had all the potential in the world to be a hicksploitation horror gem. I think they even had the freedom to take a campy approach to it or stick with the more serious tone that the film tries to achieve. It could have worked both ways but as it is LUTHER just moves too slow. Once we arrive at the farmhouse the movie slows pretty badly with a couple chase scenes with Luther and the mom and then the daughter and her boyfriend. There are a couple well done special effects moments as a result of Luther's metal chompers leaving plenty of mangled flesh and blood but I feel the the farm house arrives too quickly. Instead if we had another couple of moments of Luther on the run and having violent run ins with some locals before reaching the final location it would have spiced things up enough that the deliberately paced scenes at the farmhouse would have felt more tense and not as drawn out.

There is one thing that sets LUTHER THE GEEK apart from similar films and it is Luther himself. No, it isn't just his metal teeth that look like dollar store costume hillbilly teeth that make your lips bulge out but it is Luther's clucking. Yes, clucking. Luther doesn't talk, he just clucks like a chicken for whatever reason. The movie has a decidedly serious tone, an ominous score and a pace that tells the audience that things are scary and dreadful, not to be taken lightly or with a dose of laughter. Then Luther starts clucking away and it's weirdly hilarious. As any grown man clucking like a chicken would be.

I don't think the clucking takes away from the film, if anything it probably adds to the absurdity of the character as I'm sure the filmmakers hoped it would. I couldn't speak of the clucking... no, I couldn't speak of this film at all without discussing the bizarre ending that I sat staring at the screen in silence of for a moment trying to comprehend just exactly what the fuck it was that I saw. If you don't want the end to spoiled at all I'm officially making the rest of this section a spoiler alert so feel free to skip ahead... 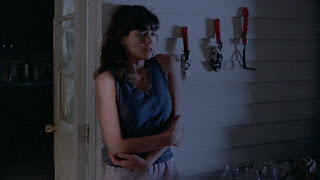 SPOILER ALERT
The ending takes an amazing twisted and oddly uncomfortable turn when Luther and the sheriff have a shootout in the barn that houses the chickens and he kills the sheriff. The mother who had come to help the officer lies in shock in the barn until morning when Luther goes to make his escape and sees the woman sitting there in shock. He moves in for a bite until she comes to and starts clucking at Luther who is briefly taken aback. He clucks back and the pair begins communicating in clucking which leads to Luther proudly strutting around the barn like a rooster, crowing loudly until the woman pulls out her rifle and shoots Luther in the chest. That would make for an interesting enough ending if the credits rolled but they don't roll until the woman has a cry session... a clucking cry session. Yes, the woman cry clucks after killing the murderer. What. The. Fuck.
END SPOILER

LUTHER THE GEEK was right there. It had the chance to be something great. And while it certainly is a memorable film that won't be erased from my mind anytime soon I think the film itself comes up a bit short on. It's passable but it just squeaks by.

The Audio & Video
Vinegar Syndrome's latest license from Troma is another outstanding job. The new 16x9 anamorphic widescreen transfer has a new 2K scan from the original 35mm negative and has a warm and filmic look to it with a healthy grain structure. The image has been cleaned up a bit but there's a bit of speckling still remaining throughout. This keeps in line with the natural film look of the transfer. Colors are naturally a bit on the softer side but the blood reds are a beautiful shade of crimson. Detail level is very good particularly in closeups of surfaces and textures. The DTS-HD Master Mono Audio track is crisp and clear with no traces of background noise or damage such as popping or crackling. The levels are stable and mixed well between the dialogue and score. 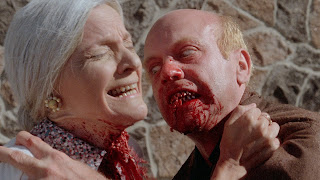 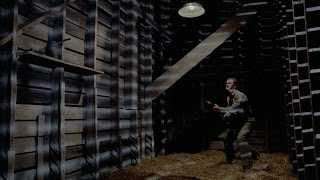 The Bottom Line
This release is an easy recommendation given the fantastic A/V presentation and the bounty of special features.