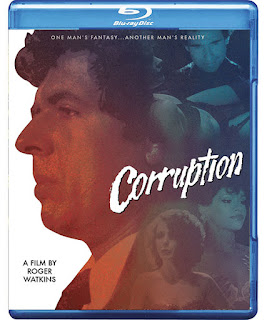 Adult film legend Jamie Gillis stars in this color coded, fetishized kink-fest that will leave the viewer mesmerized, uncomfortable and astounded all at the same time. There's rough spots of rape and treachery, S&M, hardcore sex and Bobby Astyr playing a New York tough guy like Bobby Astyr does. 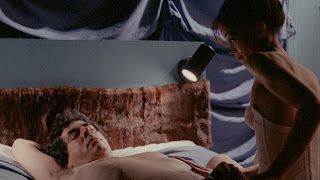 Roger Watkins builds this dream like world, filled with nightmarish sexual scenarios that all becomes a bit of a morality tale based around  greed and lust for power and sex. Watkins direction is fantastic and he gets a pair of great performances out of Gillis and Astyr as half brothers and as a piece of smut he gets some hot and steamy action with Vanessa Del Rio being a gorgeous mistress along with plenty of other various scenarios that will at times leave the audience squirming.

The Audio & Video
Vinegar Syndrome's 2K restoration on CORRUPTION is stunning. The film has a light grain structure giving it a healthy film look. Colors are bright and vivid and have a bit of pop to them. Black levels are deep and inky with no artifacting or compression issues. Details level is high and skin tones are fleshy and natural with no signs of waxiness from excessive DNR. The HD audio is crisp and crystal clear. There's no audible annoyances or background noise. Dialgoue and music are mixed very well so they're complimentary to each other and are never lost among the mix. 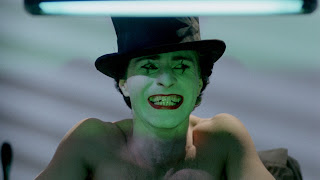 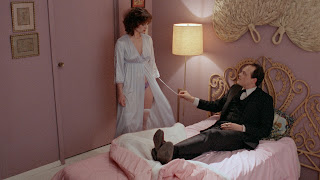 The Bottom Line
I was more excited to get this release for the Easter egg of LAST HOUSE ON DEAD STREET than I was for the actual titular feature but CORRUPTION, while a totally different film in nature, stands on its own and is fantastic. Purchase this Blu-ray for either film but you'll quickly find out that you have two special films on your hands and one is in exceptional condition while the other is a suitable placeholder for the inevitable better release. Essential viewing!