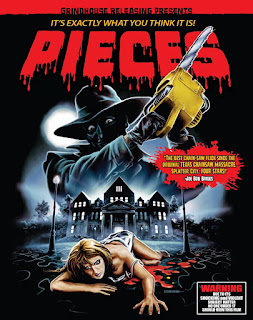 The Film
In the 1940s a young boy is caught putting together a nudie jigsaw puzzle by his mother who comes down hard on him. The boy responds by attacking his mother with an axe and dismembering her body with a hacksaw. Fast forward 40 years and there's a murderer on the loose at a local college and they're using a chainsaw to murder and maim their victims.

PIECES is a gloriously exploitatative piece of horror from director J.P. Simon who takes a more is more approach. More gore, more nudity and more red herrings. Simon's direction is competent but not very flashy. It doesn't need to be as he lets the murder set pieces and special effects be the glitz and glamor of the movie. Oh and the nudity, did I mention the nudity?

The cast has a surprising amount of recognizable names from Edmund Purdom to Paul L. Smith. Purdom and Smith give a couple of the better performances of the movie as you'd expect but much of the rest of the cast hams it up and overacts to comedic delight. The dialogue in the script is clunky at times but that leads way to some classic scenes such as the "Bastard!" scene.

You shouldn't tune in to PIECES for a subtle, atmospheric horror film with a tight script and strong performances, you should tune into PIECES for a glorious exercise in excess. There's a reason PIECES is a classic example of drive-in era horror and was a staple of the seedy grindhouse theaters on and around 42nd Street in New York City and that is because PIECES not only approves of the type of things a mother who would force you to burn a nudie jigsaw puzzle forbids but it relishes those dirty things and even encourages you to dabble in them. I love PIECES a little bit more with each subsequent viewing.

The Audio & Video
Grindhouse Releasing nails the 1.66:1 anamorphic widescreen transfer on PIECES with a brand new 4K scan from the original camera negative, maintaining the original aspect ratio. Colors are vibrant with deep crimson reds that pop just a bit to lush greens. Skin tones are fleshy and natural without a hint of waxiness. Detail level is nearly off the charts from textures to surfaces and especially in facial closeups with facial hair and skin details. The picture is crystal clear, it's immediately evident that there was significant effort into making sure the print is squeaky clean. There's no DNR or edge enhancement to speak of and PIECES has never sparkled like this.

The new DTS-HD Master Audio mix is exceptional with sparkling clarity. The mix gives a strong boost to the soundtrack that manages to slice through the various screaming and chainsaw buzzing of the film and become complimentary without ever fighting for the foreground. There's no background noise or imperfections such as crackling or popping. PIECES looks and sounds like perfection.

A CD soundtrack is also included along with a replica jigsaw puzzle to the first 3,000 copies.

The Bottom Line
Grindhouse Releasing has become synonymous with delivering the most beautiful looking and sounding releases that the cult film market has ever seen and they always pack them with special features. They seem to outdo themselves with each release these days adding something special to the mix of superb A/V to make the fans scramble with excitement. All hail Grindhouse Releasing! PIECES is an essential part of your horror Blu-ray collection.