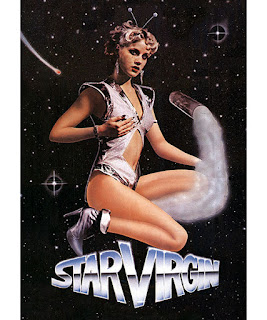 The Film
After Earth and humanity are left destroyed the only human left is Star Virgin, a beautiful young woman living out life on a space ship with her robot keeper Mentor. She begs Mentor to teach her about sex and eventually the robot gives in leading to a series of vignettes showing various sexual encounters that get young Star Virgin all hot and bothered as they progress and lead to her own self discovery of a super nova going "pop".

Director Howard Ziehm was no stranger to intergalactic smut, having directed Flesh Gordon five years prior to STAR VIRGIN and he'd go on to direct the Flesh Gordon sequel as well. STAR VIRGIN spends only a fraction of its actual runtime in space with Star wearing skimpy space outfits made of sparkly sequin and little else until she eventually disrobes entirely while listening to the stories that Mentor is telling her. Mentor looks like a soda cooler with a fire blanket duct taped to him. Rosie The Robot he is not, but he still manages to be a faithful companion to Star and is comical. 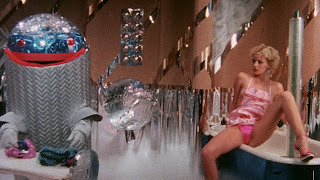 STAR VIRGIN is as campy and funny as it is sexy. The production is low rent and better off for it. I love the energy that the film has and how genuinely funny it all manages to be without ever letting the audience laugh AT the picture instead of with the picture. STAR VIRGIN is great fucking fun for the whole family! Well, maybe not the whole family. 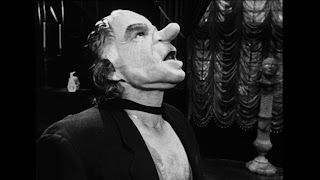 The Audio & Video
STAR VIRGIN is brought to DVD by Vinegar Syndrome with a 1.85:1 anamorphic widescreen transfer that looks pretty good. The picture quality is on the soft side more often than not but that is a product of how Howard Ziehm produced the film. There's some speckling and scratches left on the print that weren't restored and honestly there's no need for them to be. The damage left on the print is negligible and doesn't distract the viewer but does seem to add a bit to the overall vibe of the film just a bit. The English mono audio track has a bit of crackling at the very opening of the picture but that quickly disappears and there's little to no other distortions to mention. The track does just fine handling the dialogue and music without getting overwhelmed. It may not be a dynamic mix but it does the job nicely and it's nice to retain the film's original audio mix.

The Extras
An audio commentary track with director Howard Ziehm is the lone extra. 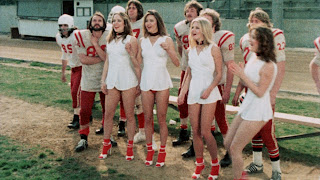 The Bottom Line
Adult film fans should take note of STAR VIRGIN because if you haven't seen STAR VIRGIN you haven't one of the most genuinely entertaining X rated films I've ever laid eyes on.

My girl friend and I watched this. To hear her say I wished I could be Sunshined Manored was a massive turn on