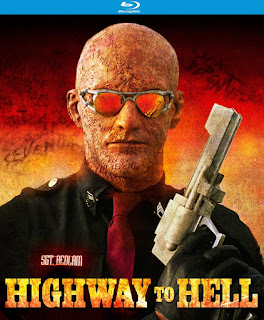 The Film
Charlie and Rachel are on their way to elope in Las Vegas when they turn down an old back road and are pulled over by Hellcop who quickly tosses Rachel into the back of his car and takes her down the secret highway to Hell. Charlie chases behind him, willing to deal with everything Hell will throw at him, desperate to rescue his girl before it's too late.

HIGHWAY TO HELL was shelved for a year after filming completed before it was unceremoniously given a limited theatrical release and then dumped on to home video in 1992 where it would gain some traction and become a minor cult classic and for good reason. There's a zany energy to the film that reminds me of a 2nd rate Beetlejuice in ways (and I mean that in an absolutely positive way), with weird background characters and bizarre monsters and set pieces.

The film relies on its comedy to succeed and it is genuinely funny. There's plenty of horror as well but not to the point where we forget it is a comedy. To top it off there's a bit of real romance that keeps us fully invested in the characters and the outcome of the film. Without getting sappy it's heartfelt and touching at the right moments.

While the setting of Hell is little more than some set pieces along a desert highway in Phoenix, Arizona the secluded desert look works in a simplistic way. The special effects add a touch of excitement from Hellcop's face which is full of carvings of various biblical words and phrases to his literal handcuffs that are made from disembodied hands linked together and may be my favorite thing about the entire movie. The effects are practical and add to that campy, fun vibe the entire movie carries.

HIGHWAY TO HELL has its flaws. It's far from perfect and is smaller scale than perhaps it deserves to be. It's full of notable names from Ben and Jerry Stiller, Ben hadn't broke big yet and was fairly stupid in his ad-libbing to CJ Graham of Friday The 13th Part 6 fame as Hellcop and even Gilbert Gottfried as Hitler. Some of these little cameos and small bits are worth a chuckle but many are throw away. The road trip/chase style of the film ends up in a few go-nowhere pit stops along the way that don't progress the story along. But despite the flaws the film didn't deserve to be shelved for a year, it's quite an entertaining piece of horror comedy that will only grow more popular as the years go by and it doesn't feel terribly dated 25 years later which is a good sign of things to come. HIGHWAY TO HELL has been unfairly overlooked and underrated.

The Audio & Video
HIGHWAY TO HELL receives its high definition home video debut as a part of the Kino Studio Classics line and results are excellent. The anamorphic widescreen 1.85:1 transfer is sharp and has great color reproduction making that stretch of Arizona desert feel hot and sweaty while skin tones are fleshy and natural. There's no signs of waxy digital noise reduction or edge enhancement. Detail levels are great showing the scarred and burned look of Hellcop's face to the dried and decaying flesh of various souls trapped in Hell. The DTS HD audio is crystal clear with no crackling, popping or other background noises. The levels are steady and stable with an overall crispness that is pleasing to the ear.

The Bottom Line
Horror, comedy and love - the recipe for success. HIGHWAY TO HELL feels like a mix of Beetlejuice, Mad Max and Robocop as directed by Satan. It's goofy, fun and campy and it's calling your name.