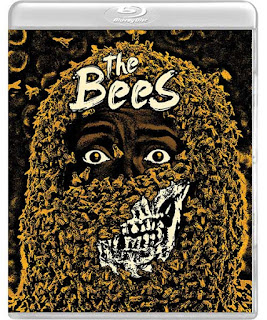 The Film
Corporations have smuggled highly deadly bees from South America to the US to profit from their royal jelly and honey despite the obvious dangers to the ecosystem and human life. And to make matters worse common techniques to subdue and exterminate bees don't seem to be working.

THE BEES is drive-in fare through and through. It's cheaply made, features a major disaster caused by bugs or animals and features a cast including John Saxon and John Carradine amongst its stars. Writer and director Alfredo Zacharias creates this B-movie (I'm being very generous calling it a B-movie... more like C or D) that has so many plot twists that you'll eventually stop trying to follow along. There's also as many plot holes as there are plot twists so there's no chance a coherent movie.

There's also no chance at a flowing rhythm to the movie as the majority of the film is just one scene after another with nothing at all connecting them until we get back to our main characters who are talking about one of the many plot points. This gives the film a very choppy and all over the place feel. 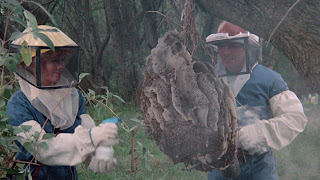 To the film's credit there's absolutely no shortage of killer bee action. I don't think there's more than a single five minute stretch where swarms of bees aren't attacking someone or something. Of course there's no real bloodshed or graphic violence but it's entertaining nevertheless and really saves the movie making it mildly entertaining.

THE BEES is too long and tries to fit 100 pounds of crap into a 10 pound bag. Luckily they managed to fit the same amount of killer bee fun into the same bag so that it isn't all bad.

The Audio & Video
Vinegar Syndrome's 16x9 anamorphic widescreen transfer comes from a new 2K scan and restoration taken from the 35mm IP and frequently looks quite good. The staged set pieces with our stars are sharp and highly detailed with good color representation. Surfaces and textures reveal their detail and depth nicely. Facial closeups reveal a natural skintone with no waxiness. The transfer is worse in scenes that show the swarms of bees as these are generally dirtier, and expose a bit of damage while being overly grainy. The DTS-HD Master Audio track features a mono mix that sounds crisp and clear. There's no buzz or hiss in the delivery and there's no background noise. VinSyn took the original audio mix and made it sound beautiful on Blu-ray. 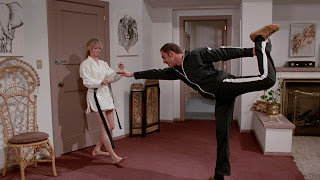 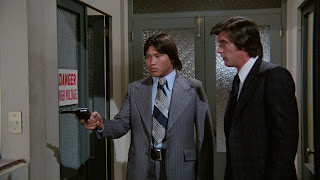 The Bottom Line
I can't call myself a fan of the movie but Vinegar Syndrome gives THE BEES a nicer presentation than perhaps it is deserving of. That's just what they do and I applaud their efforts.

THE BEES is available HERE
Posted by Celluloid Terror (Seth Poulin) at 5:01 PM