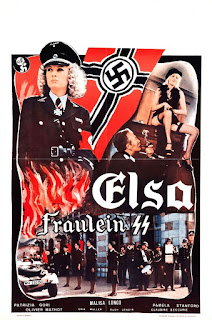 4/20 DUUUUDEEEEEEE. Smoke weed or something. Also, Hitler was born that day. Not worth celebrating the biggest piece of shit of the 20th century but it is a reason to watch Nazisploitation flicks so I watched one - ELSA FRAULEIN SS - This one wasn't as exploitative, violent or offensive as many of films in the genre but it was also a bit better made with solid performances and a decent story and there's still plenty of sex and violence. I was pleasantly surprised by this one. 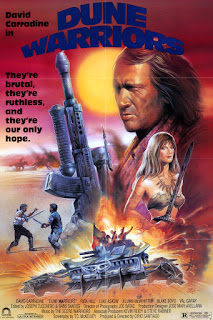 Cirio Santiago decided to make another visit, this being the fourth film I've watched from the Filipino  director this month and it is yet another winner. DUNE WARRIORS is trashy post-apocalyptic action starring David Carradine. It's packed with cool cars, flame throwers, sword fights, wimpy leaders and the lamest name for a main villain of all time. It's campy, cheap and incredibly fun. 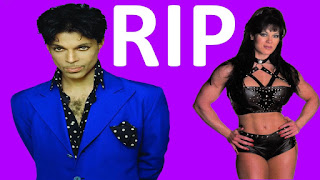 April 21st had no viewings. It was one of those days where I wasn't in a particularly good mood to begin with and then the passings of Chyna who was a major part of WWE during a time that I was growing up with wrestling and Prince who I need not mention how legendary he is but I will say that I think he's somehow underrated in ways, if that's even possible. Those things combined made it so that I wasn't in the mood to sit down and watch anything. 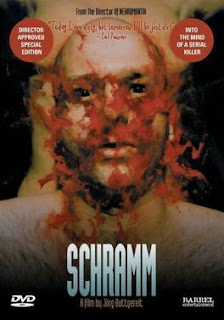 Day 22 was a strong comeback though. The first of three movies on the day was SCHRAMM. Jorg Buttgereit's fourth feature film is my favorite of his and his most polished in my opinion. It has all of the sick shit that his previous films such as Nekromantik and Der Todesking had and raises the level of his writing and the performances he gets from his cast. This is a great film that just got a Blu-ray release and I have reviewed the brand new boxset of Buttgereit's films so you should check out that video right here. 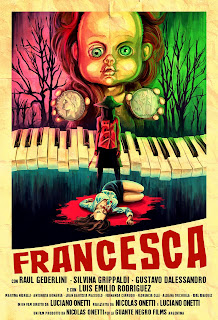 Next up was a movie I've pretty much fallen in love with immediately. While I don't think it's a perfect film it does what many contemporary Gialli fail at - feeling authentic to their original period. Many newer Gialli try to feel authentic without being able to really capture the true look and feel. FRANCESCA is a 2015 film straight from Italy and while it has it's flaws it has a solid story, interesting murder sequences and stylish direction. All of the Giallo tropes are present without it feeling disingenuous. I highly recommend Giallo fans checking out FRANCESCA. 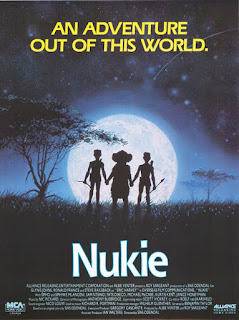 The night ended with NUKIE - The 1987 E.T. ripoff set largely in Africa. Yeah... I have seen a couple scenes from this and the trailer but sitting down to watch this on VHS was really an experience. It's a terrible movie with some of the most obvious and glaring plot holes I've ever seen. Nukie, the main alien character and his twin brother are fairly creepy looking, nothing a child would want to encounter. To be fair I feel that way about E.T. as well. NUKIE is awful but I think everyone should see it once just to know about it.