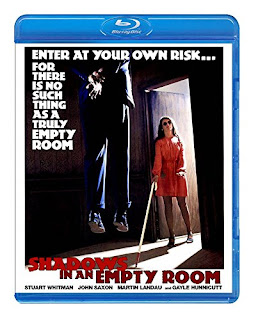 The Film
After his sister is poisoned and killed at a party police officer Tony Saitta (Stuart Whitman) takes it upon himself to identify the killer. With the help of Sgt. Ned Matthews (John Saxon) they embark on a violent investigation full of shoot outs, fights, car chases, jewel thieves and betrayal and revenge. Full of plot twists and red herrings SHADOWS IN AN EMPTY ROOM walks the line of Poliziotteschi and Giallo with skill from director Alberto De Martino.

I love finding new gems in genres that I'm already a huge fan of. SHADOWS IN AN EMPTY ROOM (which was also released as BLAZING MAGNUM, playing up it's more action driven Euro-crime aspects) is a fast paced crime film that may be Alberto De Martino's best directorial work. He gives his extremely talented cast that includes supporting roles from Academy Award winner Martin Landau, and Tisa Farrow who made a bit of a name for herself in Italian genre fare a lot to work with. Each character is different and plays distinct roles and they do so brilliantly.

The action scenes are handled with grace, including the jaw dropping car chase that immediately became one of my favorite car chase scenes in all of cinema. The driving on display does the talking and De Martino is wise enough to not get too crazy with his direction or editing, just adding in small touches of style to accentuate it.

SHADOWS IN AN EMPTY ROOM stumbles in its music as the score is not memorable or impactful to the film. I didn't notice myself actively disliking the music but I was disinterested in it. The giallo aspect of the film comes and goes a bit throughout, becoming the focal point and style when it's around and reverting back to the main poliziotteschi style when it's not. It certainly works for the story but it might not be a perfectly organic fit. I don't mind it however and find SHADOWS IN AN EMPTY ROOM to be a great fit in both the poliziotteschi and giallo genres.

The Audio & Video
Kino Lorber delivers SHADOWS IN AN EMPTY ROOM on Blu-ray with a full 1080p high definition transfer taken from a new HD scan and retaining the film's original 1.85:1 aspect ratio. The picture quality is good overall with strong levels of detail among textures and surfaces such as fabrics, facial closeups and other items such as set pieces and locations. Colors are natural while there's a nice sharpness to the picture that hasn't been overly altered digitally. It also hasn't been heavily cleaned up as there's plenty of instances of scratches and dirt and debris on the negative used. These instances don't take away from the overall high quality of the transfer and add to the grittiness of the film in their own way.

The English audio features a DTS-HD Master Audio mix that is crisp and clear. The mix between the score and dialogue is stable and effective in letting the two audio sources shine through. There's some slight background noise intermittently throughout the picture but it never reaches annoying or distracting levels.

The Extras
The lone extra is the original theatrical trailer.

The Bottom Line
A highly enjoyable example of the Euro-crime genre with an excellent cast. Highly recommended.

SHADOWS IN AN EMPTY ROOM is available HERE
Posted by Celluloid Terror (Seth Poulin) at 1:17 PM