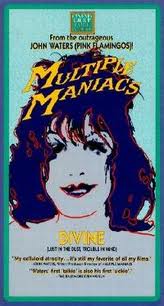 I was long overdue to visit the earlier films of John Waters so I did just that. I started with MULTIPLE MANIACS which features Divine in the lead role where she runs the Cavalcade Of Perversions with her group of freaks including homosexuals, junkies and fetish acts to exploit the audience for their cash or down right murder them for it. It's all in a day's work! Then there's the "Rosary Job" scene with Mink Stole as she turns Divine into the lesbian that she wasn't a few minutes before. There's a 15 foot rapist lobster, there's more murder and drugs perversion and everything that is trashy and wonderful. MULTIPLE MANIACS would easily have the cult following that Pink Flamingos has if it would only get an official DVD or Blu-ray release. What a fantastic film. 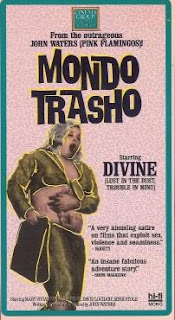 I then took a step further back, one year further back to be precise to Waters' 1969 film MONDO TRASHO which is nearly a silent film aside from some voiceover work creating very sparse narration and dialogue. This film is referred to as The Gutter Movie as it was literally filmed in gutters, alleys, and abandoned places around Baltimore. I didn't have the love affair that I did with MULTIPLE MANIACS but it was great to see Waters' and his crew of Dreamlanders really beginning to mesh and get their chemistry together, especially Divine who seems to just be dipping her toes in the waters that she would jump into head first a year later and then years later become a drag and cult film icon. There's plenty to like here but it is a lot of experimenting with ideas and styles that would later become fully realized by the God of trash cinema. 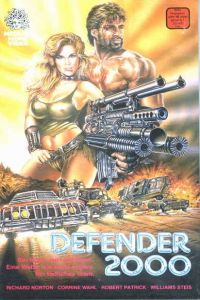 I finished the day with EQUALIZER 2000, another Cirio Santiago post-nuke film taking place in the barren and blistered wasteland that was once Alaska. Now a desert but still rich with oil, it's a wild blend of car chases, shoot outs, fire, mountain people that look more like the Fillipino actors they are than the native Alaskans I assume they're supposed to be. There's a lot of bad acting and cheesy dialogue and I eat up every second of it It's not quite the great time that Wheels Of Fire was but I still highly enjoyed it up to the very end where in celebration everyone throws loaded guns into a fire to signify their new found peace... I can only laugh at how bad of a time they had seconds after the film cut to credits and live ammo heated up and began going off.