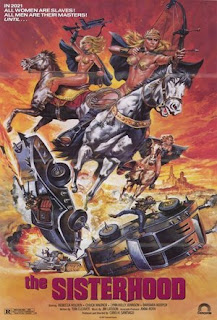 Cirio H. Santiago is showing up quite a bit early on this month with his wonderfully trashy post-apocalyptic action flicks and THE SISTERHOOD is yet another. This 1988 film adds in a fantasy element to our normal armor and leather clad testosterone fueled battles in the barren wastelands and adds a bit of a feminist angle as well. THE SISTERHOOD features a powerful group of women who all have distinct special abilities from reading minds to being able to shoot laser beams from their eyes. They're small in numbers but legendary amongst the wasteland and quite powerful. THE SISTERHOOD isn't my favorite of the Santiago movies I've watched this month but it's still an absolute blast. 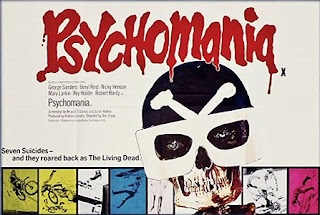 PSYCHOMANIA is a movie I've had my eye on for a while and I finally popped this weird cult horror, undead biker gang movie. Thankfully this movie doesn't get super cheesy with brain eating zombie bikers and makes our undead bikers very normal looking after being resurrected by an old ritual. The gang begins to run amuck and create all sorts of having across the city. PSYCHOMANIA has some great ideas and visuals but it never reaches its full potential. The undead bikers create some havoc but it's short lived and much of their time spent undead is wasted by being snarky and rude instead of really getting down and dirty. I rarely say this but I think this movie could benefit from a remake given the right team behind it. 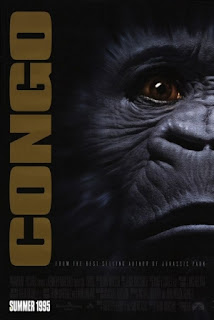 I rounded out the night with CONGO. The point of CONGO was to be something I've seen a hundred times and didn't need to give my full attention to while I got some writing done. I have loved this movie since I was a child and continue to love it with each repeat viewing. No, it isn't a good movie but it's cheesy, funny and has those scary white apes. Oh, and Tim Curry. 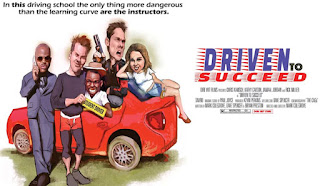 Day 7 started with DRIVEN TO SUCCEED a new movie from a local Maryland group called Dire Wit Films. They've done films such as Mutantis, 7th Day, and Isle Of The Damned. Their films frequently have a strong sense of raunchy humor with their tongue planted firmly in their cheek. This is their first straight forward comedy and I nearly turned it off by the 30 minute mark. I found it to be painfully unfunny and it was honestly a chore to sit through. Then something shifted and I found myself enjoying things a bit more. It still wasn't great but it felt like the actors hit their stride in their roles and the writing had a better flow to it. Comedy isn't easy and this ended up being a respectable effort. 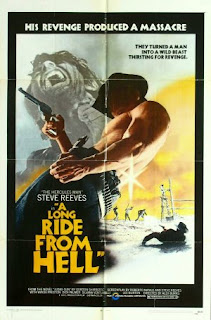 The first spaghetti western of the month was next - A LONG RIDE FROM HELL starring Steve Reeves as a man who is hellbent on revenge for being falsely imprisoned with his brother who died while incarcerated. There's plenty of shoot outs and fights and the scenery is nice but there's absolutely nothing that sets A LONG RIDE FROM HELL apart. The score is not memorable and wasn't even notable while watching. Music is a major part of the spaghetti western genre and the emotional drive could have been much more. The scene in the jail was short and only one fleeting scene showed any sort of real hardship and mistreatment. Had the film spent more time in the prison and let the audience get to know the brothers a bit more the film would have meant more and would have had less time to plod around the 2nd act almost aimlessly at times with too much useless side story shit. It's decent but nothing more. 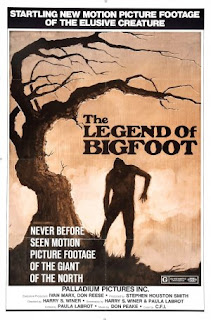 The 70s provided a ton of bigfoot material including THE LEGEND OF BIGFOOT, a 1976 documentary that can be summed up easily. 50% random nature footage, 30% driving around to various regions and hearing about the local bigfoot legends and 20% fake bigfoot footage all narrated by a man that sounds like he's doing a voice over for an old claymation Christmas special. It's boring, really boring.