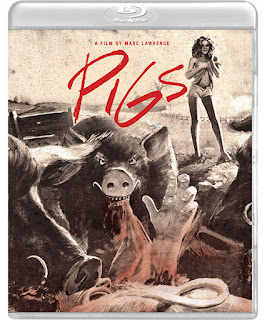 The Film
Upon arriving in a secluded California town, Lynn takes a waitressing job with Zambrini, a retired circus performer who now runs a small cafe with a large pig pen out back. A local legend says that his pigs only eat human flesh and that he has been murdering drifters to feed to them. Now the sheriff and the locals have grown suspicious of Zambrini and his pigs along with trying to protect the new girl in town. 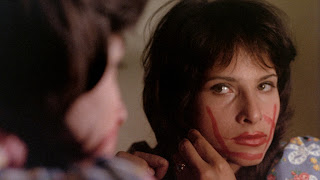 PIGS is not at all what I expected it would be and it was for the best. I'm all for a movie about killer pigs running wild on a small town, perhaps in some sort of vengeance for being harvested for their meat. Mmm killer bacon. PIGS is not that movie. PIGS is a fever dream of a horror film, steeped in sweaty, hazy atmosphere. It's highly psychological and mythological. There's also plenty of that supremely weird 1970s vibe that can't be faked. It's sleazy, but not to be self gratifying. It only goes as far as is necessary to make the psychological horror aspect to the film work.

The film succeeds so well because the screenplay is crafted to be suspenseful and hallucinatory and doesn't give in to excess that would only serve to cheapen the overall experience of the film.

The Audio & Video
Vinegar Syndrome gives PIGS a full makeover and facelift. It's like this Blu-ray came straight from the salon! The 16x9 anamorphic widescreen transfer is sharp and highly detailed. Colors are natural but keep the film's natural sweaty haze. Dark scenes have a bit more graininess than day time scenes but the black levels are quite deep and have no issues with blocking or compression. A DTS-HD Master Audio mono mix handles the audio and it sounds fantastic. Free of any distortions and background noise, the simple mix gets the job done with sparkling clarity and a natural crispness. Nothing gets lost with the dialogue and score complimenting each other. An overall fantastic HD presentation. 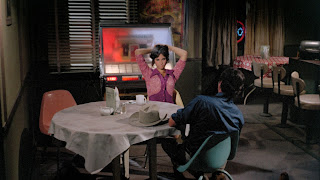 I must note that the new 2K scan has been taken from the 35mm Interpositive with select shots taken from theatrical prints due to missing or severely damaged elements. Vinegar Syndrome makes not of this before the film starts to clarify the shifts in quality - I didn't notice any dramatic shifts in quality and couldn't pick out when the theatrical prints were used. That's just another example of the quality work Vinegar Syndrome does.

The Extras
This release packed, stacked and certainly doesn't lack. 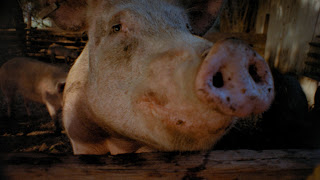 The Bottom Line
This may be the best non-porn release from Vinegar Syndrome to date. They've taken a rather obscure horror title and given it the royal treatment and packed it with extras. As far as I'm concerned this is an essential release.