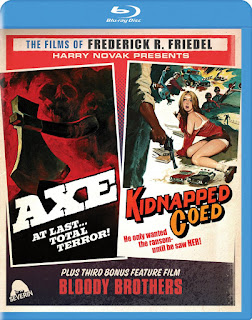 The Films
AXE is the debut film from Frederick R. Friedel and is a classic example of drive-in era exploitation horror. In the film three men are on the run from the law for murdering a man and end up at a secluded farmhouse where a young girl named Lisa lives with her disabled grandfather. The gang decides to stay there where they humiliate the girl and her grandfather until she takes her revenge on the gang.

AXE is a simple idea that is executed quite well. All of Friedel's films were region productions with local actors and locations. The main cast is good enough and Leslie Lee who plays Lisa is unsettling in her role as victim turned killer. Clocking in at under 70 minutes AXE does exacty what it sets out to do without wasting any time or energy. The film has an underlying creepiness to it that our villains play no part in. Lisa and her grandfather are weird enough on their own before we give the girl reason to start offing people. This is highly enjoyable stuff.

With his first feature film under his belt Friedel quickly followed it up with KIDNAPPED COED which feels much bigger in scope and more seasoned. This film which also stars Jack Canon, is a road trip film as a man has kidnapped a wealthy man's college student daughter in an attempt to extort ransom money from him. Their trip is full of perils and pit stops and takes some unexpected turns as the girl falls for her captor as hell falls for her and it isn't the Stockholm Syndrome.

KIDNAPPED COED is great. Not only is it a bigger picture than AXE but it is more polished and more mature. The writing is well rounded with actual character development and a dark sense of humor. It's not a perfect picture as it is still a regional production of an exploitation film in the mid 70s. It's flawed but excels in spite of those flaws and makes its imperfections work for it. I'm a big fan of KIDNAPPED COED.

The Audio & Video
Severin Films have given these two drive-in exploitation classics a loving HD debut. The 16x9 anamorphic widescreen transfer preserves both films' original aspect ratio and does so with a natural film looking quality. There's a healthy grain structure and little to no digital noise. The picture is sharp and rich with detail. Skin tones are natural and healthy. There's a bit of speckling and debris within the prints as they haven't been totally cleaned up but it keeps the natural 70s drive-in charm while making them shine for the present day. The audio features a 2.0 Dolby Digital mix that is crisp and clear without any major annoyances or background noise. The levels are stable and steady without dropping in or out or spiking in volume. I love what Severin has done with the A/V on this release.

The Extras
-BLOODY BROTHERS - This is the special feature that makes this release special - a 3rd feature film that is a hybrid of both AXE and KIDNAPPED with optional audio commentary by Stephen Thrower
-Audio Commentary on each film with writer/director Frederick R. Friedel, production manager Phil Smoot, and makeup artist Worth Keeter
-"At Last... Total Terror!" - The Amazing True Story of the Making of AXE and KIDNAPPED COED
-"Moose Magic" - The George Newman Shaw and John Willhelm Story
-Stephen Thrower on AXE and KIDNAPPED COED
-Trailers
-TV Spots
-Radio Spots
-CD Soundtrack

The Bottom Line
Severin Films gives us the definitive release of these cult classics along with extensive and heartfelt supplemental material and a soundtrack CD to boot. Highly recommended!