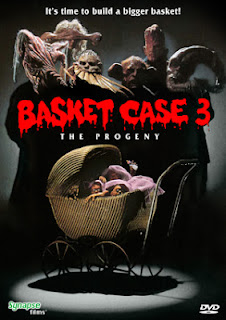 The Film
Director Frank Henenlotter (Basket Case, Brain Damage) returns for the 3rd and final chapter in his twisted series with BASKET CASE 3: THE PROGENY, picking up just where part 2 left off. After a brief recap of the climax of the previous film Duayne has lost his mind and decides the only way he'll be happy is if he and his freak of a twin brother are once again conjoined at the hip. A ball of yarn and a crochet needle make this happen in very bloody fashion. We move forward a few months and Duayne is now in a straight jacket inside a padded room where Granny Ruth (Annie Ross) has been taking care of him, along with her house full of deformed freaks. We learn that Belial's girlfriend is now pregnant so the whole group has to take a bus trip to the only doctor Granny Ruth trusts with her loved ones and what bus trip is complete without a sing along of the "you've got personality" song? 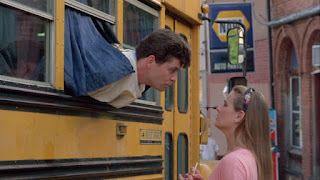 Once at the doctor's house the most bizarre, violent, and just insane birthing sequence ever put to film is captured. Octomom has nothing on Belial's new family. The wild birth sequence is followed up by a ridiculous dream sequence in which the word "trapezoid" is used as a sexual turn on for possibly the first and only time in film history. After the fun of the birth Granny Ruth realizes that Duane is missing as he has landed in police custody and they find out about the doctor and Belial, who is a fugitive. The cops sneak in to the house and shoot Belial's lover Eve, thinking it was him. The pair of bumbling cops are chased from the house by the rest of the freaks, leaving Belial furious. 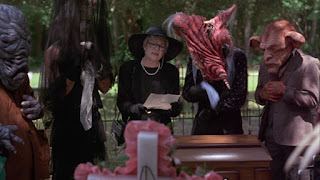 Belial arrives at the police station in his trusty basket and exacts his bloody gruesome revenge. Including ripping an officer's head off by biting his lip, having a young girl be shot, twisting a head around and more. Belial and Duane are finally reunited and flee the police station but not before Belial is injured when his basket is shot. Helping Belial heal and have an easier time in the future, Duane and the doctor's son construct a robot suit (think a crude version of Kraang from TMNT) that Belial uses to continue his revenge on the people responsible for killing his love while Granny Ruth proposes a deal to trade Belial for the babies the police still have. Of course it's a setup and there is a showdown between the sheriff and "Robo-Belial" resulting in a terrible death for the sheriff. 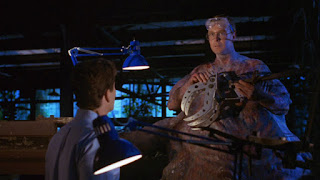 BASKET CASE 3 is a fun romp of crazy creatures, violence and dark humor. This is the type of film that director Frank Henenlotter was put on Earth to make- A nasty, comedic look at human deformities. The makeup effects are simply amazing and without a doubt the best part of both sequels in the series. The film plays out in a simple fashion with your heart going out to the freaks, especially Belial and you certainly feel for him and are applauding his revenge. The biggest downfall that this film (and part 2) has is that the Times Square, NYC location of the first film was simply perfect. It was a seedy place where the "normal" people were just as crazy and freakish as Belial and the story was far more original than this rather by-the-numbers piece of revenge. No matter, if you're looking for a fun time that you can sit down with a few beers and some popcorn and watch some ridiculousness, BASKET CASE 3 is a solid choice.

The Video
Synapse Films brings BASKET CASE 3 to us in an anamorphic widescreen 1.78:1 transfer that is very nice looking. There is a healthy natural grain level but is clean and free of dirt and debris. Flesh tones, both human and prosthetic look natural and lively. The quality of the print allows us to see the special effects makeup in all its glory and the bloody reds look great. I don't have the old MGM disc to compare but this new release probably looks as good as the DVD format will allow. A fantastic job. 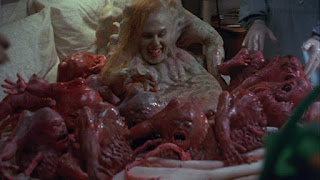 The Audio
A Dolby Digital 2.0 Stereo track provides a crisp and clear presentation and is perfectly suitable for the disc. Dialogue and the soundtrack are mixed nicely and never have to compete with one another. Levels remain stable throughout so you won't have to reach for the remote every few minutes to adjust the volume.


The Extras
The lone extra on the disc is a theatrical trailer. 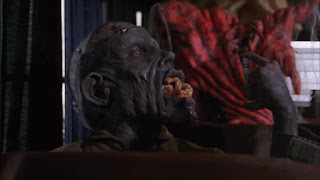 The Bottom Line
Synapse Films brings BASKET CASE 3 back in print for the first time in almost a decade in the United States with a really solid DVD presentation of a film that will certainly find its niche once again. Some more extras would have been nice, but just getting to complete the trilogy is the true prize here. Recommended for anyone that is a fan of weird horror comedies or any fan of Henenlotter's other work.