After posting yesterday's viewing I eventually realized that I overlooked a movie I had watched... doh! So here it is- 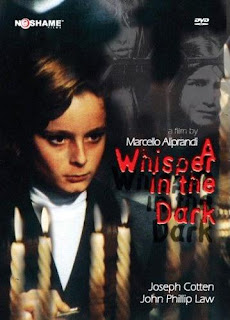 A WHISPER IN THE DARK is a gothic styled Italian film from 1976 with a very deliberate pace. It involved a family seemingly being tormented by the young son's imaginary friend. The pacing could be a turn off for many people as it is intensely slow, but interesting throughout. There is some really nice photography around the Italian villa and I'm glad I checked it out for something different. 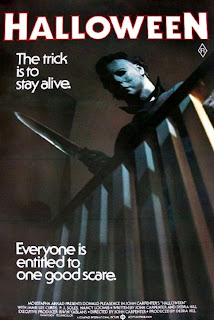 What better way to start off the viewing than with HALLOWEEN? I tried to watch this right as the clock struck midnight but the thorn in my side that is my Blu-ray player decided not to play it even though it has played it countless times before. So after going to bed and waking up at 5am for no apparent reason I give it another chance and of course it works. I've never watched this film at 5am on Halloween morning but it was a blast. This is one of my 2 favorite films and in my opinion perfect from the opening 1-shot scene that is breathtaking to the music cues and all of the classic shots and lines in the film. Just an incredible film that is a must-watch each and every October 31st. 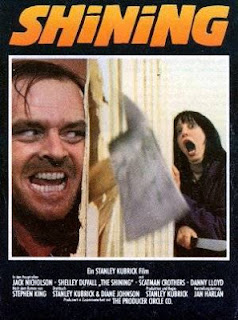 I followed that up with a viewing of THE SHINING. This is another Blu that the player wouldn't play the night before that it apparently kissed and made up with by morning. I've never seen this film in HD before and it looked great compared to the countless times I've seen it on VHS, DVD or broadcast TV. Nicholson is insane, Kubrick creates a sense of foreboding dread and claustrophobia. In the entire massive hotel we only see a handful of locations it has to offer. I don't care what Stephen King thinks of it, I think it is phenomenal. 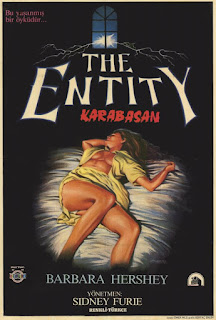 After a disappointing turn out of kids trick or treating in my neighborhood I threw on THE ENTITY. I haven't seen this film in a lot of years and had forgotten most of it. It drags a bit for me but it remains an effectively creepy ghost story and Barbara Hershey is solid in the lead role. The sound effect that plays whenever the ghost is around isn't as annoying as I feared it would be visiting this one again after such a long time.

Episode 3 of AMERICAN HORROR STORY: ASYLUM was next

The month long challenge that at times tried my patience, melted my brain, picked me up out of a bad mood, gave me some good laughs with friends and was altogether 31 days of fun ends with a film I find truly beautiful- THE BRIDE OF FRANKENSTEIN.


THE WRAP UP:
Another year, another 100+ films down. The burn out I was feeling about halfway through the month luckily subsided and it became fun again quickly. Next year I need to plan for a lot less crappy movies to see for the first time, if at all possible. 2013 will be my 5th year doing this challenge along with DVD Talk and will probably be my last trying to watch 100 films in the month. While I have no intentions on stopping an October horror marathon of some sort after that, 100 in a month is draining at times, especially when it is garbage film after garbage film. We will see though, only the future can tell. Thanks to everyone that read the blog, followed on Facebook and commented on either. Hopefully I was able to give you recommendations on some films (good or bad), make you laugh or get you through the work day a little easier.

Now here are some numbers...

Thoughts To Sum It Up - Anthology movies need to make a bigger comeback, Kevin Smith still sucks, Scream Factory is awesome, Horror desperately needs some talented actors like they had in the 60s and 70s, Bring on something other than shitty shot on video slashers... please!
Posted by Celluloid Terror (Seth Poulin) at 1:05 PM