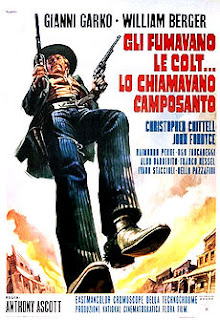 I love watching spaghetti westerns when the weather gets chilly out. I guess it may be because of their warm setting and how hazy it looks that it helps warm me up, but even those set in snow covered landscapes are better in the winter for me so it has been a perfect time to catch up on  genre I love.

THEY CALL HIM CEMETERY (aka They Call Him Graveyard, A Bullet For The Stranger) is a film from Giuliano Carnimeo who is perhaps best known within the genre for creating the Sartana character. He teams up with Sartana himself, Gianni Garko, again in this film in which he's referred to as Ace Of Hearts just as, if not more often than Cemetery. The McIntyre boys return home as young adults for the first time in many years to find their father's small town being extorted by a group with an unknown leader. John and George McIntyre are attractive blond haired boys from "back east" that don't quite understand the law of the land where gun play is the way to settle things and babies suck on bullets to calm down. They try to settle the issue with their father's land with civility until one too many times their life is nearly ended had it not been for Ace saving them. Along with their friends and helpers, Chico and Pedro they enlist the help of Ace to teach them how to shoot to protect themselves.

With a new found set of skills and a new friend shadowing them the McIntyre boys set out to discover the identity of the gang's leader and settle the score. Along the way Ace comes in contact with a man from his past named Duke who we find out gets hired by the gang for added protection. The film boils down with local politicians and peacekeepers in on the corruption until the final showdown and duel.

By the time this film was released in 1971 the parody/comedy cycle was going strong. While some of the dirtier and grittier films that made the genre famous were still being produced most of them had heavy doses of self parody. THEY CALL HIM CEMETERY certainly doesn't escape this, but it uses it in light doses and it never becomes overbearing. The two barroom fight scenes are a bit hokey and overstay their welcome but they're probably the worst offenders in the film as far as the parody goes. The film itself isn't anything super original, a basic story plays out but our cast is pretty solid. Garko is more often than not great in his roles and he shows it here. The way Ace and Duke (William Berger) play off of each other is simply fantastic. They have an obvious respect for each other but go about it in different however complimenting ways. The McIntyre boys also do a good job of trying to do the right thing but being totally out of their element. The photography from Stelvio Massi is gorgeous, even with the underwhelming print I watched from the 44 film set that I'm sure most SW fans own. Add in a really solid score by the legendary Bruno Nicolai that is driven by whistles and Carnimeo (as Anthony Ascott) puts together a really solid flick that would probably be held in higher regard if it didn't fall into the comedy pitfalls (no matter how well they were handled).