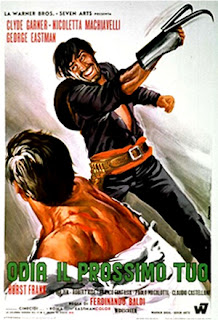 Bill Dakota arrives in town with his wife and child frantically looking for the sheriff. A notorious gunman named Gary Stevens (George Eastman) is chasing him down and nobody, including the local law enforcement want anything to do with helping him. After Stevens mercilessly kills Bill and his wife for a map to a goldmine Bill's brother Ken sets out for revenge. Stevens is partnered up with a powerful gangster named Malone to split control of the mine (and the map itself) 50/50. It doesn't take long for Malone to double cross Stevens and have him dangling over a pit of snakes being forced to give up his half of the map. Its at this point that Dakota finds the helpless Stevens and makes a deal that he will only make him stand trial instead of killing him if he gives up his half of the map. After being sentenced to death, Stevens narrowly avoids the gallows with the aid of Malone who wants him to retrieve the missing half of the map. After more double crossing Stevens finds himself in a game of life or death at the hands of Malone until Dakota breaks up the party to finally get the revenge he's been seeking.

Directed by Ferdinando Baldi (TEXAS ADIOS, DJANGO PREPARE A COFFIN) in 1968, HATE THY NEIGHBOR is a frustrating film to watch. While it has plenty going for it including really solid performances from the cast, especially Horst Frank as Malone, and a solid score, the film suffers from extremely messy writing. Focusing more on the characters than a bunch of action scenes, the film has potential to set itself apart but two of our three leads are handled poorly to say the least. Ken Dakota is simply a bland protagonist. It takes until the climactic shootout scene for him to really do anything interesting other than be a goody two shoes stand up citizen and after that he goes right back to it. Gary Stevens is supposed to be this well known, notorious baddie but is often outsmarted, and out-muscled. George Eastman does a nice job portraying Stevens but the character is just too weaselly to be taken seriously as a major threat. On the other hand, Malone is handled well as the rich, tough, gangster that is a step ahead more often than not. The action scenes are hit or miss, sometimes being exciting and captivating like the end at Malone's estate and sometimes hokey and filled with forced comedy. The coffin maker character fills up almost all of his screen time with annoying comedy.

The story itself, as you can probably tell, is nothing out of the ordinary but the shift in focus to the three leads playing cat and mouse games could have made this a stand out spaghetti western but the writing leaves a lot to be desired and really drags down what could have been something special.