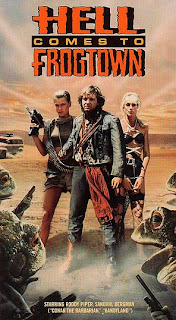 If there's a list for best professional wrestlers turned actors Roddy Piper has to be on it. Appearing in a few dozen films since the mid 80s and starring in about half, Piper is no stranger to being in front of the movie camera. His natural charisma that has been showcased for decades in wrestling was perfect for a transition into film. Piper's most notable role is John Carpenter's sci-fi/action cult classic They Live but just a year before that he appeared in a piece of 80s gold.

Ten years after the nuclear war wiped out the majority of the population and leaving most of the survivors either mutated or sterile. The war isn't over, its simply on hold until both sides repopulate, which is difficult with so few fertile women and potent men. Sam Hell (Piper) is an arrogant con who is freed from his jail time only under the condition that he serves the US Army with his extremely high sperm count. Hell agrees and he is forced into the most dangerous and uncomfortable chastity belt device you'll ever come across. The device can only be unlocked by his partners in the mission and if he strays to far from her he suffers a painful electric shock. The mission is to extract a group of fertile women being held captive in the mutant reservation area known as Frogtown. Frogtown as you may have guessed by now is a slum area controlled by mutant frog people and controlled by King Toty.

The mission hits a snag as Hell and his commanding officer, Spangle, are captured by Frog Guards. Spangle is thrown in with the rest of the women and forced to dance to make Toty's "3 snakes" happy. Hell is tortured and abused until his codpiece device is removed by the frogs so they can study the technology. It is at this point that Hell jumps into action hero mode and rescues Spangle and the women and bust them out. They are tracked by Toty and other frog soldiers along with a man from Hell's past hellbent on becoming the biggest warlord in America.

HELL COMES TO FROGTOWN is a piece purely of the 1980s. It is ridiculously cheesy but has a message beneath its leathery, green skinned surface dealing with the dangers of nuclear bombs and the Cold War. Directed by Donald G. Jackson who directed a bunch of low budget genre fare during the 80s and 90s and R. J. Kizer who is probably best known from this film, deliver an extremely entertaining 86 minutes. There isn't an over abundance of style or flare but the duo competently puts together scene after scene of fun. The frog creature designs look good and the makeup is really solid. Hot Rod doesn't quite get as "Rowdy" as he would a year later when he's fighting aliens in special X-Ray glasses but he's still a blast to watch.

Yes, this movie is cheesy. No, the acting isn't great. And no, this isn't a piece of art. It doesn't need to be and it doesn't want to be. This movie is fun. We have Rowdy Roddy Piper running around in an explosive codpiece kicking frog mutant ass and being paid by the US government to get laid a lot. Need I say more? Didn't think so.