Sometimes when you first discover a movie, whether by accident or recommendation, it sticks with you. Everything about it lingers in your memory until you visit it again and again. It takes a special type of film to do that. THE GREAT SILENCE is one of those films for me.

Silence is a mute gunslinger with the fastest draw in the west. He has been left scarred and unable to speak after a violent childhood incident that took the life of his parents. The man is hellbent on righting the wrongs done to innocent and helpless victims. In the snow covered frontier of Utah the nasty Loco (Klaus Kinski) leads a group of bounty hunters to prey on a group of persecuted outlaws who have taken refuge in the hills, coming out only when they need to for food. The outlaws are hiding because their crimes aren't serious enough to condemn them to death despite the bounty on their heads. Silence is the only man that can stop the corruption within the town that effects every single person one way or another. 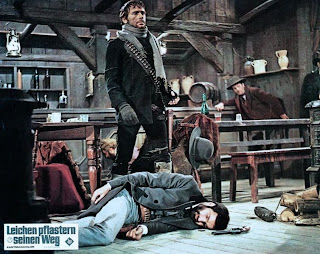 The town's new sheriff does his best to try and turn this town around to become a more civilized America where all races live in peace and murder isn't a profitable living. The town's Justice Of The Peace is deep into the corruption forcing innocents into a life of crime to get a price on their head for his bounty hunters to kill and split the profits. Silence is hired by such a man's widow to take down Loco who has captured the entire group of mountain refugees and is holding them hostage waiting for Silence in an epic showdown.

The plot of THE GREAT SILENCE doesn't seem too far off from many other westerns of this period or any other. The difference lies within the details. Silence (Jean-Louis Trintignant) is our main protagonist however he is similar in many ways to our lead antagonist Loco. Both men charge for their services despite their principals, and both men refuse to draw their gun on the other man first to avoid jail. Silence tries to bait Loco into drawing first as is his trademark style of picking the fight but not starting it. Loco is as smart as he is ruthless and doesn't fall for it. It really is the meeting of two master minds, two sides of the same coin if you will. Kinski played in quite a few westerns but this is without a doubt his finest role in any of them and an argument can be made that it is his best ever. The sadistic cockiness Loco even when he seems beaten is perfect. Trintignant is just as good without speaking a word. He conveys emotions brilliantly with just facial expressions and his pistol, which despite what the sheriff thinks, is incredibly accurate. 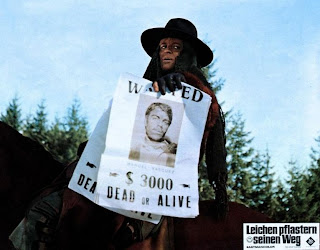 Director Sergio Corbucci (Django, Companeros) is a master of the western, probably the second most famous spaghetti western director behind only the great Sergio Leone, and proves it here. His incredibly skilled and stylish direction coupled with Silvano Ippoliti's gorgeous photography that captures the scope of the blizzard stricken landscape is a match made in heaven. Ennio Morricone's score is one of his finest efforts for any western and fits the incredibly somber tone of the film perfectly.

THE GREAT SILENCE is not a typical western, in fact it has been described as the "anti-western". Everything you know about westerns, Italian or not, is turned on its head. Spoiler Alert The ending which includes every single sympathetic character in the film being mercilessly killed is a day ruiner. There is no heroic triumph of good over evil here folks. This is simply a depiction of how nasty life can be and was in the old west. Our hero is mutilated and then shot dead preceding a bloody massacre. The ending was such a downer that producers made Corbucci film a "happy ending" which is included on the DVD. And while that ending is just fine and dandy it is the downer ending that completes this film as it should be. End Spoiler.

This film is stunning both visually and thematically. It is crying out for a Blu-ray release and a wider audience. While this is widely considered one of the finest spaghetti westerns produced it still needs to be more widely known. This is a masterpiece of filmmaking that stays with me long after each subsequent viewing. For no reason at all I will find myself humming the score or picturing the wide shots of Silence riding his horse through the snow covered hills. THE GREAT SILENCE is in my personal top 3 westerns.

Posted by Celluloid Terror (Seth Poulin) at 11:34 AM

I love this film especially the brutal ending. The bleakness reminds me of John Carpenter's The Thing.