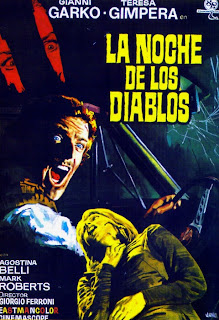 Nicola, played by Gianni Garko, who is perhaps best known for his role as spaghetti western hero Sartana, is a wealthy lumber importer who is on a business trip to purchase fancy wood. While taking a shortcut through a forest Nicola sees a fleeting vision of a woman and swerves to avoid her, damaging his car in the process. The woman has vanished and Nicola is left with a car that can't be driven. Nicola treks through the woods looking for any help he can find when he stumbles upon an old house with a family just arriving from burying a member in the family plot. Nicola explains his situation and the matriarch tells him to wait until morning for help and that he can stay with them as the forest is not safe during the darkness.

Nicola is introduced to the entire family at dinner, including the head of the family, his two sons, his brother's widowed wife, and her daughters, and his own daughter Sdenka. Sdenka is put in charge of seeing over the visitor and making his stay pleasant and safe. Sdenka is an absolutely gorgeous redhead, with features that would stun any man. As she talks with Nicola she becomes infatuated with him and his worldly knowledge of city life. It becomes apparent to Nicola that the family is a very superstitious group, scared of the woods and the evil it holds after dark.

With banging, scratching and various other noises being heard after sunset the family is paranoid and the patriarch decides to put an end to the "family curse". He heads out into the woods with a sharpened wooden stake and is told if he doesn't return before sundown at 6 O' Clock he will be staked too. When he returns covered in blood just as 6 p.m. dies there is an argument over whether he made the deadline or not. The family lets him stay and Nicola's car is eventually fixed. He promises Sdenka that he eventually return for her, and she instructs him to talk to a police officer in town who used to live in the village and would understand. After a brief talk in church with the officer Nicola returns to Sdenka, only to find the curse has spread deeper into the family and now must fight for his life to escape the forest. With children eerily laughing as he is attached, Nicola fights off the evil to escape the immediate danger. Nicola is found wandering in a frantic, damaged state is brought to a mental hospital in the city with a case of amnesia. Soon after Sdenka comes to identify him which triggers Nicola's memory.

The story of NIGHT OF THE DEVILS is simple and revolves around the Wurdulak. If you've never been exposed to a story involving the Wurdulak it is easiest described as a vampire creature but with some features of a zombie... sort of. It is easy to see the general idea of the film from that, the family stalks each other, and previously the rest of the village until it turns them undead as well. The story is simple yes, but it is told with expertise from the writers and director Giorgio Ferroni adds some style into the direction that keeps even passive scenes interesting and engaging. Ferroni had previously directed the criminally underrated MILL OF THE STONE WOMEN and again here has a knock out film that isn't talked about enough. Ferroni gets the most out of his cast. There isn't a cringe-worthy moment in the film and nobody lets the script down. From the strong willed father and his headstrong son to the more timid and loving children the cast is great. The soundtrack is an understated piece that works well with the film and adds to the mood.

NIGHT OF THE DEVILS is a film I've just learned about in the last year when I heard about it from Raro Video. After reading reviews about it (while avoiding plot specifics) I formed this idea of the movie in my brain. It was a bit weirder and more contemporary than what I got. While set in the day it was filmed, it is absolutely a gothic horror film and pulls it off perfectly. It is movies like this that keep my passion for finding new films alive and well.