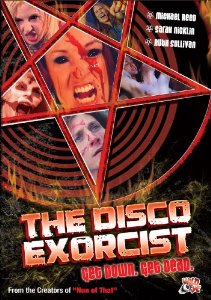 Before the opening credits to THE DISCO EXORCIST we get a hot striptease, black magic rituals and groovy lava lamps. It was pretty obvious this was going to be a fun time.

Rex Romanski is a disco-loving swinger and the most popular dancer at the local night club. He has all the moves and has had all the ladies. This particular night a new girl catches his eye, her name is Rita and they immediately hit it off. After spending the night together they make plans to return to the club for another night filled with dancing, drinks and sex. All is going well until Rex spots his favorite porn star Amoreena sitting alone at the bar and asks her to dance. Rita flips out, attacking and ripping out some hair and swearing a curse upon the two. 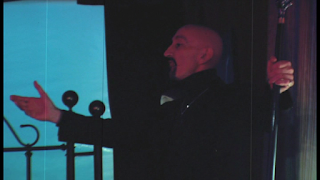 Rex and Amoreena leave the club and spend the night fucking like rabbits. The next day Rex accompanies Amoreena to the set of her next porno shoot and takes the place of the male lead who is three hours late to set. While this is going on Rita is still reeling from being dumped and sticks to her words of curses as Rita is heavy into black magic. Rita casts a spell which possesses the three women on the shoot of the film and they go on a killing spree inside the studio. Rex is able to save Amoreena from harming him or herself in an effort to save her and be with her. 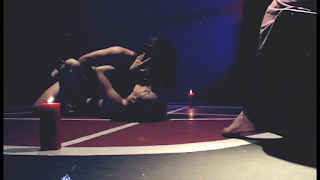 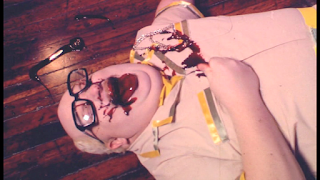 Good lord... THE DISCO EXORCIST is delightfully over the top in every way. The film is a cross between The Exorcist, 70s trash and sleaze, classic Troma and a bit of The Evil Dead at the end and presents itself of the period with all the scratches and missing reels that have become popular in the last 6 or 7 years making the film look like it was taken straight from a 42nd St. theater in Manhattan. While the film could have done without the missing reels as they don't add anything to the film, it doesn't overdo the artificial scratches so they become distracting. The director Richard Griffin is no stranger to low budget horror and really does a solid job with his cast and crew here. The performances are better than you'd probably expect and the soundtrack is a fun electro-disco influenced piece. If you enjoy horror movies that don't take themselves seriously and feature a lot of laughs and sexy naked women I'm sure you'll find a lot to like with THE DISCO EXORCIST. How bad can a movie with "Wakey wakey my fiendish flock, time to awake some spectral cock" as a line be anyways?