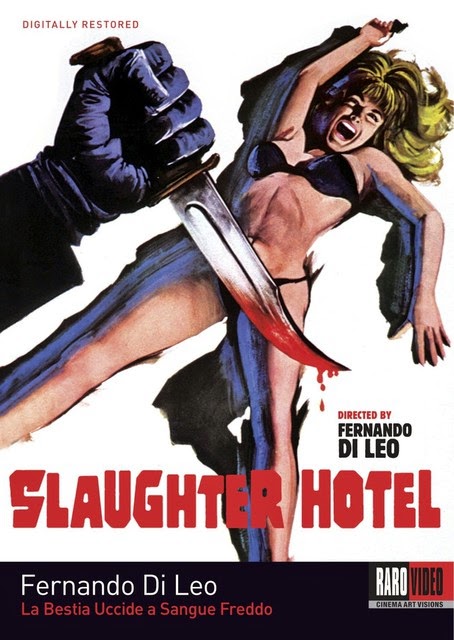 The Film
A killer is on the loose at a retreat for wealthy women to get over their problems, whatever they may be. Usually it's just a case of beautiful well-to-do women not knowing what to do with all of their money and it drives them mad in their day to day life. Draped in black from head to toe, the killer stalks the usually scantily clad and often nude women with various medieval style implements that he finds have decorated this castle turned asylum. Everything from axes and flails to an actual Iron Maiden itself are used to dispatch the women and none of them are off limits.

Klaus Kinski stars in this slightly off beat, totally insane and properly sleazy horror affair from director Fernando Di Leo who is best known for his legendary work within the Euro crime genre. SLAUGHTER HOTEL is ripe with giallo vibes and sometimes gets lumped in with the genre. I wouldn't call this a true giallo but I won't argue it being discussed among other ones either. Di Leo's direction is trippy and surreal at times, acting more like a lucid dream (or nightmare) than any sort of cohesive straight forward narrative. From wild zooms to hard camera angles and overflowing with blood and skin including plenty of closeups on masturbating vaginas, Di Leo doesn't hold back on the excess or style.

Strangely enough, Klaus Kinski, who was as psychotic in his real life as this film is, does hold back. He gives a strong performance without feeling the need to overdo it or have his presence be known every time he enters a scene. His role, that of a doctor who has taken a strong interest in one of the patients who has taken an even stronger liking to him, provides enough room to show his skill without making him the focal point. The beautiful women here including Rosalba Neri (Lady Frankenstein, French Sex Murders) and Margaret Lee (Venus In Furs) provide endless eye candy but aren't really asked to do much besides look pretty, shed their clothes and die. That's just how it is sometimes and SLAUGHTER HOTEL doesn't try to be anything it's not.

The Audio & Video
Some good and some bad in Raro Video's transfer of SLAUGHTER HOTEL. The 2.35:1 anamorphic widescreen transfer has a pretty good sharpness overall with good color representation. Detail levels are generally high as well. Unfortunately the transfer suffers from a heavy hand with DNR, at times making the picture look overly waxy. There is also a thin layer of digital noise over the picture throughout. It only gets to annoying levels a couple of times though but if they were trying to recreate the look of natural film grain they failed big time. Overall I think the picture quality is a step up from what standard DVD would offer even with its faults.

Raro provides us two audio options, English and Italian, both with 2.0 Stereo HD tracks. The Italian option has nice clarity and is largely free of any popping, crackling or other disturbances. Unfortunately I only found this out after watching the film in English where on a couple of occasions the audio drops out totally. This happens at one particular murder scene where the entire reaction to the killing is silent. I can only figure that English audio was never recorded for this segment but Raro should have plugged in the Italian audio for the duration and cut back to English when it came back. That is the standard practice and makes much more sense then just letting the audio drop out completely. The English track does sound good otherwise, as with the Italian track it has good clarity and no background noise. It just seems like a lazy oversight on Raro's part to let that happen.

The Bottom Line
While this isn't a perfect release by any means there is plenty here to enjoy and is still worthy of a purchase. Recommended!