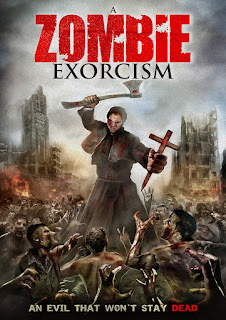 The Film
Three siblings gather at a church for a funeral when an unknown evil awakens the dead and the zombie apocalypse begins. The trio flee to the catacombs beneath the church and must fight for their survival.

Thankfully A ZOMBIE EXORCISM is a rather short affair clocking in at under 50 minutes. The film is bland in its writing and character development along with adding nothing new or noteworthy to the zombie genre. The direction is all over the place with heavy use of shaky cams during the more exciting sequences and camera angles quickly changing to point of view handheld angles despite this not being a found footage movie of any type. 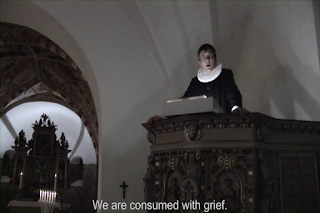 There's non stop action and plenty of gore to be had though. If you're interested in the simplest side of zombie movie fare then you'll enjoy your time here but I was looking for something a bit more. I can't knock the film for having lots of the juicy bits though, that's for sure. The other upsides to A ZOMBIE EXORCISM are the acting which is solid and some great set designs.

The Audio & Video
Wild Eye Releasing's anamorphic widescreen transfer makes the shaky, low budget photography look pretty good. The transfer is clean and stable with no damage. The Danish audio features English subtitles and has a strong mix with steady levels. There's no background noise or audible hiccups to mention. 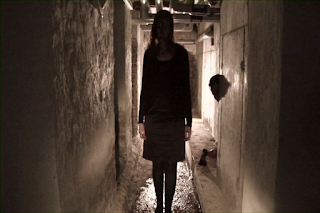 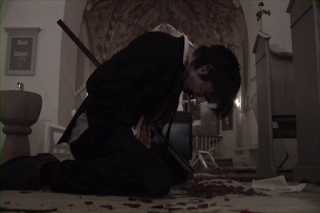 The Bottom Line
I didn't care for it but maybe you will. I would have liked to see them expand on the movie a bit more than just having a random zombie outbreak for no real reason.