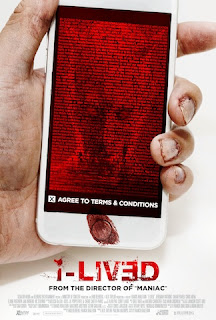 Josh is a recent graduate of Stanford University struggling to make it on his own reviewing new apps on his Youtube channel to make ends meet. Josh comes across a new self help app called i-Lived which provides you missions to help meet any personal goal you type into the app. Upon an initial review Josh isn't able to gain the six pack abs he had hoped for and gives the app a mediocre review but later finds that the app will bring him all of his hopes and dreams and even cure his terminally ill mother if he's willing to go the distance with the missions the app assigns him which get more and more dangerous with each passing day and engulf more of Josh's sanity as he goes along with them.

This is the third film I've seen from director Franck Khalfoun, the first being the middling stalk and slash film P2 and the second being the exception Maniac remake starring Elijah Wood. It was the style and finesse in the remake of Bill Lustig's classic exploitation horror film that I had hoped to see in i-LIVED. Though the film had a noticeably smaller budget, leaving less room for multiple location shoots and a better overall production value, there was still enough resources available to take the film's plot and have it succeed. 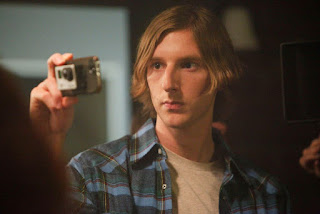 Unfortunately the slick direction we've previously seen from Khalfoun is lost here and this movie feels every bit of the inconsequential direct-to-video horror film that it is sadly destined to be (despite a very limited theatrical presentation). Khalfoun has no flair here with rigid camerawork and very elementary and basic shots. Our cast doesn't help matters as they stumble through the script either over or underacting or hamming it up to the nth degree. Jeremiah Watkins isn't all bad as our lead Josh but his performance is uneven. There's one scene that I felt he brought real emotion to which involves his elderly landlord and a lamp. 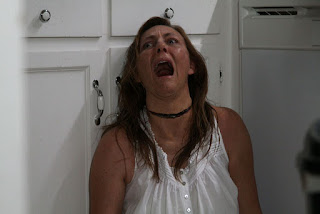 There's a very clear message on display in i-LIVED dealing with the endless obsession of new apps and features for the cell phones that seem to be glued to our hands these days and letting them take over too much of your mind. I can support that message and I think i-LIVED had potential to turn it into a good horror film and at times it did. i-LIVED has some well done moments sprinkled throughout but I look at it like grabbing a handful of trail mix and only getting one or two pieces of what you like and the rest is all peanuts. Yeah, it's nice you got something you liked at all but now you have a handful of dry peanuts to deal with.

And that dear reader ends up being what i-LIVED is worth, sadly- peanuts.