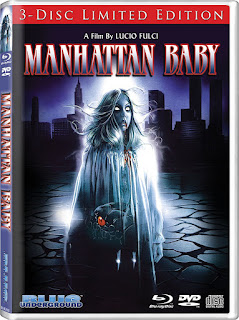 The Film
A young girl on vacation in Egypt with her archeologist father is given a beautiful but mysterious charm of a jeweled eye which causes her father to go blind in the middle of a dangerous pyramid. Things only get worse when the family returns home to Manhattan as a series of supernatural horrors plague the family and the family must find a way to break the ancient curse they have fallen under.

MANHATTAN BABY was a bit of a departure from the films horror fans had come to expect from Lucio Fulci as it came at the tail end of his extreme gore era that he is perhaps still best known for today and more immediately came directly after the hyper violent and ultra misogynistic The New York Ripper which in all fairness is a rock solid giallo but received poor reviews and a lot of criticism for being overly cruel towards women. Perhaps this made Fulci take a step back with MANHATTAN BABY which was released in the same year as The New York Ripper but is a much different type of horror film.  MANHATTAN BABY features visual effects that we had not seen from Fulci before, including computer generated laser beams which were the cause of the father's blindness. While these  computer generated effects were nothing more than your standard effects of the time this created a bit more of a "high tech" film for Fulci for the first time, something we'd see him continue with in his next two films, the sword and sandal epic Conquest and the futuristic post apocalyptic sci-fi/action flick The New Gladiators. Both of those films would make more use of computer generated special effects than the practical gore effects that Fulci made use of so frequently and masterfully immediately before these pictures. 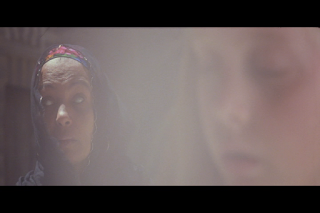 MANHATTAN BABY is probably best described as the bridge between those short eras of effects work for Fulci as it has its own memorable scenes with practical gore effects including the first death inside the pyramid and the bird scene, both leaving their victims a bloody mess. Unfortunately I think MANHATTAN BABY is overlooked as it isn't lumped in with those gore classics and isn't mentioned in the same breath as his non-horror films that came in the two years after. It's almost an anomaly in that regard but it shouldn't be. While I admit that MANHATTAN BABY didn't leave the greatest first impression on me when I first watched it as I found it to be slow and just a bit tedious it has since grown on me with subsequent viewings and is now something I find to be unfairly overlooked. First, Fulci creates a thick dream like atmosphere that almost gives the film a surreal quality. Fabio Frizzi's wonderful score accentuates these moments with a pulsing synth and almost jazz-like sound. It's almost worth checking out the film for Frizzi's score on it's own. MANHATTAN BABY also has some creative and innovative scenes that will stick with you such as a child's bedroom vanishing into a desert of sand. This is just one of several moments that has really good cinematography from Guglielmo Mancori who photographed some of Italy's best genre films of the 60s, 70s and 80s. 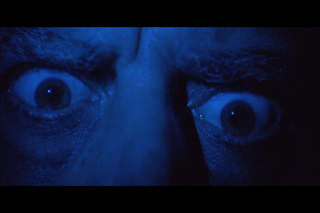 MANHATTAN BABY does suffer from the same problem that many Italian horror films of the era do in that it just doesn't make a ton of sense. Now this is no problem for me as a massive fan of these films I've come to accept that it's really style over substance quite often and you can piece together enough of a story to make it all work but be warned the story of MANHATTAN BABY is fairly thin. The visuals should more than make up for it. I don't think MANHATTAN BABY is the Fulci's best film or even his best of the 1980s but I do think it is much better than it usually gets credit for. It's also an interesting piece in Fulci's filmography to look at from a historical standpoint. Shocks, gore and Egyptian curses... what more could you want?

The Audio & Video
Blue Underground's anamorphic widescreen 2.35:1 transfer comes from a new 2K scan and restoration and maintains the films original aspect ratio and looks quite good. Detail is easily the best it has ever been on home video for this film and is strong enough at times that you can almost count the individual grains of sand sliding through a hand. Colors are vibrant and vivd while skin tones are fleshy and healthy and not at all waxy. Black levels are deep and have no issues with blocking or compression. The disc features two audio mixes, both in English - A 5.1 DTS-HD Master Audio is strong and allows Fabio Frizzi's memorable score to really pump through the speakers. There's also a DTS-HD mono mix that features the film's original mix in the finest quality. Both mixes are a pleasure to listen to and are crisp and clear with no distractions or distortions. There's also no background noise to speak of. English, French and Spanish subtitles are available. 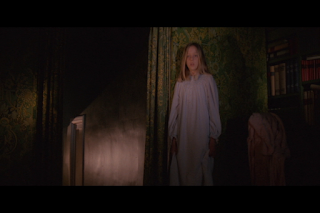 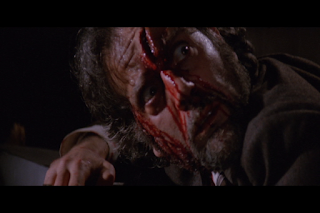 The Bottom Line
Blue Underground has given this underrated and overlooked Fulci film new life with this packed limited edition Blu-ray release and I don't foresee a better release of MANHATTAN BABY coming down the pike anytime soon.