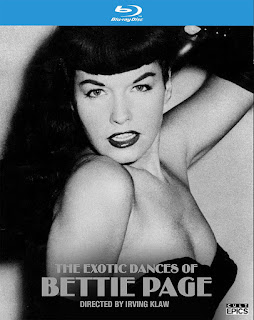 There's nothing in the way of narrative here as this is more of a historical document (an important one at that) of Bettie Page's early films in what could be considered the 1950s version of stag films than any sort of narrative film or even a documentary. These films by Irving Klaw feature Page dancing in home settings in lingerie with tinted photography. The preservation of these films is equally important in preserving Irving Klaw's history as it is Page's. Klaw operated a mail order business for photos and film of beautiful women and was one of the first notable fetish photographers in the country from the 1940s until censorship of the 50s ended his career with attempted court hearings trying to link pornography to juvenile delinquency. After closing his business Klaw burned many of his negatives with estimates of up to eighty percent of his work being destroyed. Having these reels of Bettie Page dances is made all the more important by that fact.

These films were shot on presumably cheap 8mm film so the image quality isn't incredibly sharp or detailed but it is still perfectly watchable and enjoyable. The image is quite clean however and free of damage or dirt and debris. The audio sounds wonderful but it is nothing more than overdubbed music and doesn't feature any talking from Bettie Page which is standard for what these films were intended to be. The Blu-ray presentation from Cult Epics is solid top to bottom and features a brand new 2K scan. It's safe to say this is the best these films will ever look. There's also a selection of special features including a selection of Bettie Page's Kamera Club Films which are more short 8mm films presented in HD and a Q&A with Bettie's nephew Ron Brem called Bettie Page Uncovered: The Private Life and Photographs which is a perfect companion piece of Bettie history to these films.

There's so much to love about this release from the historical value in the preservation of these films to the loving presentation and quality release and more importantly it's just a fun time to watch Bettie Page do what she did. Fans of Bettie Page, pin-up culture and stag film buffs all need to take note of this release.