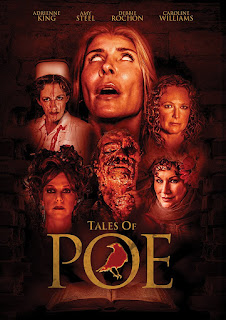 The Film
TALES OF POE is a three part anthology film adapting Edgar Allan Poe stories and poems into horror films. Each short takes on a different story and a different vibe. Kicking things off is a chilling psychological thriller take on The Tell Tale Heart that has some gory moments and a disturbing antagonist. The film continues with chapter 2, The Cask, tells the story of a man who is murdered on his wedding night by his bride and business partner and buried behind a makeshift brick wall until he returns from the dead to take his revenge. 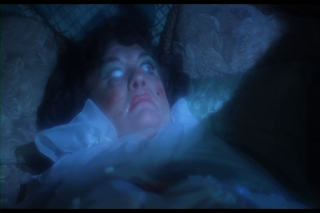 This take on The Cask Of Amontillado is my favorite of the three shorts. I love the visual style and special effects makeup in this rather bloody film of betrayal and revenge. This story has been adapted many times in several different formats and has even had some of its plot devices and scenes taken and added in to unrelated stories. This short stands tall among the better adaptations this story has seen. The story closes out with a very surreal short adapting Poe's Dreams. I think this short is filmed beautifully and has some memorable scenes and creepy moments such as the scene with the tap dancing man which is staged and choreographed perfectly but the non linear storytelling and length of this short left me feeling that it dragged a bit. I did enjoy it for the most part but I thought it could have been trimmed down a bit. It was smart to end the anthology on this short because I think it would have alienated some viewers from giving the film a fair chance or really letting themselves settle into it. 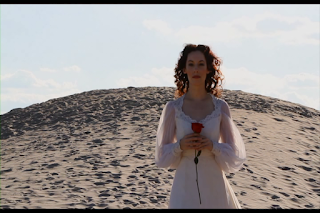 TALES OF POE shows that the stories of the legendary writer are still loved, still relevant and still translate well to film. Horror has a long love affair with Edgar Allan Poe and it's great to see the current generation of independent filmmakers getting on board with these stories and poems. The movie is uneven and flawed in parts but the direction shows an eye for style and artistry and the acting, including appearances from notable horror actors such as Caroline Williams, Adrienne King and Amy Steel, is better than expected and never poor. TALES OF POE is a welcomed horror film for this decade and hopefully will lead the way for more quality modern Poe adaptations.

The Audio & Video
Wild Eye Releasing brings this indie anthology to market with a nice looking anamorphic widescreen transfer that features true colors and an image that faithfully captures each short's individual feeling and atmosphere. The image is stable and clean. The stereo audio is also well done, with a crisp sounding track that has a nice mix between dialogue and score. There's no pops, crackles or other distortions to speak of. 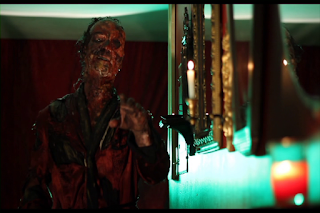 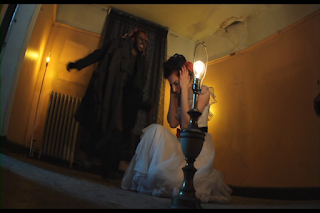 The Bottom Line
Whether you're a fan of Edgar Allan Poe or indie horror or both there's a lot to like about TALES OF POE. Recommended!