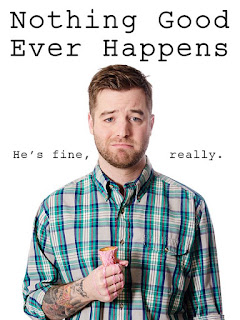 Straight forward comedies with no real ties to horror or exploitation are not something I regularly cover here but when I saw the trailer for Henrique Couto's NOTHING GOOD EVER HAPPENS it immediately struck a chord with me and I knew it would be something I could relate to. So while you won't be seeing the newest Zac Efron comedy being covered here I think a dark indie comedy like NOTHING GOOD EVER HAPPENS fits in just fine.

Josh Miller stars as Neil, a self employed painter and graphic designer who has just been dumped by his long term girlfriend and ends up drunkenly drinking bleach while drinking away his feelings which lands him in the psych ward of the hospital and on court ordered therapy. Now Neil must sort out his feelings, his friends and most of all his life to find happiness and meaning in his life. Or maybe he'll just waste away eating a lot of Chinese take out.

NOTHING GOOD EVER HAPPENS is a great watch for anybody floating in the purgatory of their 20s and early 30s, not quite sure what direction they should take in their lives when everything they've come to know has seemingly turned its back on them and fallen apart. It's a great coming of age story at a stage in life that we don't get many films that answer the numerous questions we still have at that age. Miller nails the lead role, infinitely likable and easy to relate with, he carries writer/director Henrique Couto's strong script. He's supported by a Bradley Diehl who plays Neil's best friend Dave. The type of friend that rags on you and shits on you and will endlessly make fun of you about everything but has your back every second of every day. He's the type of friend we all need and Diehl is hilarious in his crudeness. Along with Diehl is Marylee Osborne who becomes one of Neil's inner circle after his breakup and proves that new friends and meaningful relationships can pop up from the most unexpected places. Osborne does a great job proving to be a soft soul with a rough and tough exterior.

The film also shows that sometimes swallowing your pride and letting go of a grudge is the best thing that can happen to you and allow you to be free, grow and again, create a meaningful relationship. Henrique Couto's film isn't all hugs and kisses, there's plenty of darker moments and eye opening revelations like not all long term friendships are worth hanging on to and not everyone will fit into you life forever. It's a harsh realization but it's one we all find out eventually. When it comes down to it NOTHING GOOD EVER HAPPENS shows that plenty of good things actually do happen but life is a rocky fucking road and getting to those good spots can really put us through our paces and sometimes it's okay to befriend your local Chinese restaurant owner to get free noodles to eat away the pain... but not everyday. Get real.

NOTHING GOOD EVER HAPPENS will be available for purchase HERE and also for rent on Amazon
Posted by Celluloid Terror (Seth Poulin) at 8:16 PM