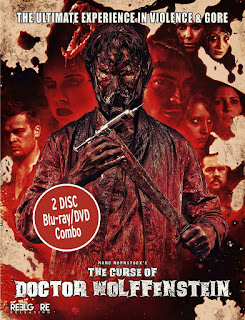 The Film
In pre-World War II Germany Dr. Victor Wolfenstein has become obsessed with discovering the secret to immortality. Upon finding a serum that can stop the affects of aging he has infected himself with Necrosis, a flesh eating disease. The evil doctor must replace his rotting parts with fresh parts and as the local village is under attack by the doctor they bad together and bury the madman alive. Now in present day the doctor has unearthed himself, still rotting and longing for fresh flesh and a group of teens on their way to a giant party get stranded in the village and quickly learn of the curse that Doctor Wolfenstein has put upon the area.

THE CURSE OF DOCTOR WOLFENSTEIN carries on the tradition of not only its writer/director Marc Rohnstock who is no stranger to splatter films, but a longer, deeper tradition of German splatter films dating back to Olaf Ittenbach (The Burning Moon) and Jorg Buttgereit (Nekromantik). American audiences had a chance to learn Rohnstock's name several years ago when his film Necronos (aka Necronos: Tower Of Doom) was released on DVD by Troma. The bloodshed was the real deal. The gore was incredible. And five years later Rohnstock is back with a dirty, grimy film that  will make you want to take a shower. If you're expecting buckets of blood you should bring barrels because the hordes of nameless victims that Doctor Wolfenstein dispatches in gruesome, grotesque and downright gross ways all have the gore flying. 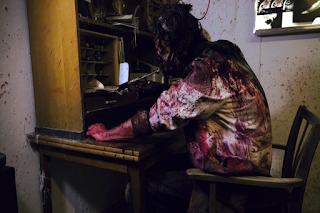 Make no mistake, you're here for the gore. If you've followed this site for any amount of time you'll know I have very mixed emotions on gore for the sake of gore as simply being gory doesn't make a horror film great. There is that special time where it can make it damn entertaining though and that is the case of THE CURSE OF DOCTOR WOLFENSTEIN. That isn't to say the film is perfect as a good twenty or even thirty minutes could be trimmed without losing anything of substance and it would make the film a tighter product.

But, what the fuck, that would also cut out a half dozen kills or more. And remember, these aren't your cut away, clean up with a single paper towel kills. These are victim after victim stripped down to their most vulnerable position, sliced, diced, chopped and popped. In the best way THE CURSE OF THE DOCTOR WOLFENSTEIN is disgusting. I can talk about the acting, which is fine, or I can talk about the writing, which features a standard slasher set up and all of the tropes and the editing or lack thereof has been mentioned but sometimes what can be described as the lowest common denominator can be more than enough for a good time. 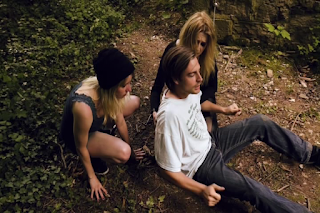 The Audio & Video
The third release from Reel Gore Releasing is another stunner in terms of A/V presentation. The Blu-ray quality of DOCTOR WOLFENSTEIN is top notch with exceptionally sharp picture and high detail levels. Colors are strong especially the crimson reds from the arterial sprays. Flesh tones are natural with no signs of waxiness from excessive DNR. There are two audio options, both in the film's native German with optional English subtitles. There is a DTS-HD 2.0 and DTS-HD 5.1 mix respectively. The 2.0 mix is crisp, perfectly clear and stable with no level fluctuations. The audio is free of distortions, hiccups or wobbles. 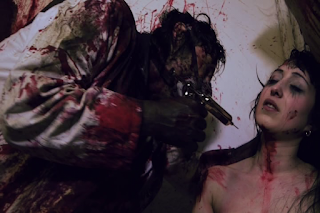 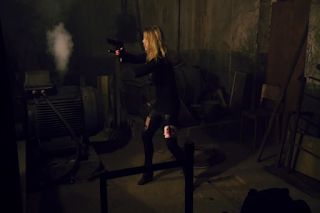 The Bottom Line
THE CURSE OF DOCTOR WOLFENSTEIN might be THE release for gore hounds in 2016.

THE CURSE OF DOCTOR WOLFENSTEIN is available HERE
Posted by Celluloid Terror (Seth Poulin) at 1:10 PM