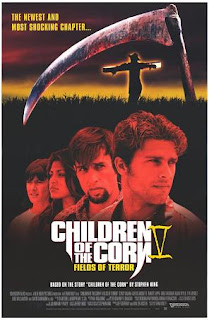 CHILDREN OF THE CORN V: FIELDS OF TERROR started out with a glimmer of hope when the opening credits listed a few names I was not only familiar with but that I was a fan of. Alexis Arquette, Fred Williamson, David Carradine are all performers I enjoy and I was thinking "okay, maybe we've got something here." On top of them Eva Mendes, Ahmet Zappa co-star and even Jason Voorhees himself, Kane Hodder, has a role. I'll tell you right now he was only in a single scene as a bartender and not as a machete wielding corn stalk monster. What a let down. The opening scene features a clunky 90s CGI murder featuring the main child that would be running the show of our misfit kernels. Sadly shortly after we lose Alexis Arquette and Ahmet Zappa who had great energy and would have been a nice contrast to the rest of our main cast of college students who are basically running around with dumbfounded, mouth agape, looks on their face for the majority of the film. 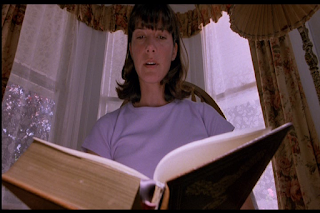 Oh you're interested in the plot? Well, six college friends (more like 4 friends after the first few minutes of the film take away the two most entertaining characters) go on a road trip and end up stranded in a small rural town that they not smells of burnt popcorn. After getting warned to leave by the sheriff (Fred Williamson) they hole up in an abandoned house for the night and later find that one of the girls missing brothers is in town living with Luke (David Carradine) who seems to be the leader of the strange kids. Luke lets her see her brother who informs her that he has no interest in leaving and is going to be marry a younger girl who is also pregnant with his child. The child leader Ezekiel chooses the brother who has reached 18 years of age as the annual sacrifice to He Who Walks Behind The Rows which means he would have to throw himself into the burning corn silo but the brother refuses and tells Luke his religion is a lie which leads to a battle between the college friends and the runaway brother and the pitchfork wielding psycho children. There's even a showdown between Luke and the sheriff which is my favorite scene in the film and is easily the best special effect moment of the film as well. 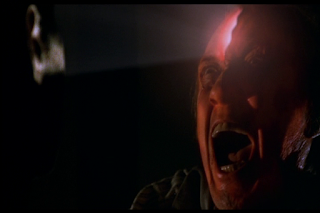 The plot is weak and the film isn't interesting enough to keep your attention throughout so that you really settle in to it. I found myself getting restless and bored and simply didn't care about a single thing going on. Fred Williamson and David Carradine are both wasted by given little to do. Our main group is filled with bland characters and uninspired performances and the one thing that these movies have given us each and every time until now is creepy kids but they even ruin that as these kids looked like any child you'd see getting dropped off at junior high and not a group of rural religious nut jobs. Ethan Wiley wrote the first two House films and even directed the second which is a wacky mishmash of ideas that works for a wonderfully fun 80s cocktail but his entry in to the CHILDREN OF THE CORN series is my least favorite through the first five entries. 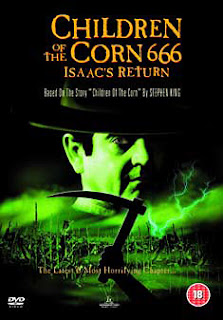 I spoke too soon. It gets worse. You might think, and I would be right there with you that the return of John Franklin who played Isaac, the preacher leader of the children in the original film would be an upgrade to the series but no, CHILDREN OF THE CORN 666: ISAAC'S RETURN is yet another step down on this ladder of shit. I'm not sure how much lower this thing can go. 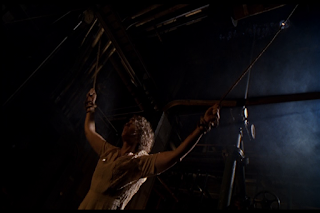 Natalie Ramsey stars as Hannah Martin, the first baby born from the cult in the original film, now she has decided to return to Gatlin to find her birth mother. After a strange encounter with a preacher that ends in Hannah crashing her car into a corn field she is taken to the local hospital by the sheriff. At the hospital she finds out Isaac was not killed but ended up in a coma. After she leaves the hospital Hannah begins to get stalked and terrorized during her stay at a local motel. The townspeople speak of a prophecy between her and Isaac but Hannah won't leave until she finds out about her mother.

Well we're scraping the bottom of the barrel here. Isaac is in a coma for years and only Hannah's return wakes him which is an okay plot device, especially five sequels deep but this movie is as painfully boring and disjointed as we can get. Dead birds, messages scrawled across the wall in nail polish, and mentally unstable patients at a hospital are the majority of the horror elements until the eye roll inducing ending where we finally meet He Who Walks Behind The Rows and find out he's some local douche bag in a leather jacket. He manhandles Isaac, killing him and Hannah escapes but is no pregnant with the baby of He Who Walks Behind The Rows. 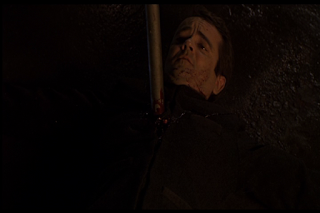 It's so bad. So so so bad. If you're not bored to tears then you're surely getting infuriated at how stupid the whole thing is. It was bad enough that I was complaining to myself that there was barely any corn! And yet again the creepy kid factor is kept to a minimum. I was hoping Isaac's return would at least bring something of merit back to the series, not that I'm any sort of lover of the original but it's by far the best of the series but no, the plot device was a waste and I'm sure this film is only remembered for being the film that brings back John Franklin and Isaac to the series.

If I was beginning to regret the decision to go through this entire series before I am now in full regret mode. These movies are awful.