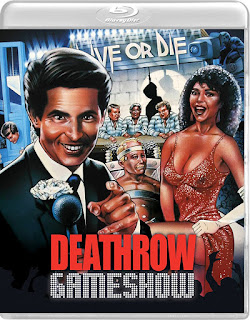 The Film
Chuck Toedan is the host of the popular but wildly controversial TV gameshow Live Or Die where death row inmates compete for a chance to beat their sentence or at least win some prizes for their family on the way out. Toedan's own life is put in jeopardy when he kills a local mob boss and a hit man comes to the studio for Toedan. A battle for survival ensues as Toedan tries to outsmart and outmaneuver the mafia hit man while being put in the same situations he's used to seeing his contestants in!

Mark Pirro directed DEATHROW GAMESHOW only having had experience making Super 8 shorts and his debut feature A Polish Vampire In Burbank which was also shot on Super 8. Pirro was given the chance to make his first 35mm feature and didn't squander it despite being overwhelmed and realizing his tight knit crew from his days with 8mm were going to need some help with a more experienced crew. The thing Pirro didn't need too much help with was writing a hilariously dark comedy that is full of colorful characters and fun sight gags. 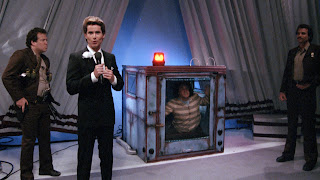 John McCafferty is absolutely fantastic as Chuck Toedan and perfectly embodies a corny gameshow host. His chemistry with Robyn Blythe is natural and their character progression is handled nicely. Blythe is quite likable and is a genuinely nice person who gets caught up in a bad situation, and during her dinner with the hit man a rather disgusting and off putting situation as well. Beano does a great job playing a caricature of a typical mafia hitman, playing up his Italian heritage to a comical level. The best scenes of the film are of course the gameshow scenes and seeing the inmates meet their ends in all of the hilaroiusly staged events. Or is it of their family's reaction to their demise and the surprising upswing in their mood when they find out they've won some wonderful prizes? It's both. The cheese smothered script works so wonderfully that all of the over acting and hokey parodies of all aspects of game shows bring nothing but laughs.

DEATHROW GAMESHOW has grown on me to be among the most underrated comedic gems of the late 80s and it's low budget nature and campy vibe only add to its charm.

The Audio & Video
Vinegar Syndrome releases an impressive looking Blu-ray that easily outshines previous DVD releases that frankly didn't look bad themselves. It's the immediately noticeable improvement that speaks volumes for the quality of this transfer, taking a film that looked fine on home video and making it look truly outstanding. The 1.85:1 anamorphic widescreen transfer retains the film's original aspect ratio and has been restored from a brand new 2K scan from the original 35mm negatives and features a natural and healthy grain structure. Colors have never looked better for this film than they do here, with an increased richness and vivid quality. Black levels are deep and inky and the picture is quite sharp and clean. The English DTS-HD Master Audio Mono is especially crisp and clear with steady levels and no distortions or background noise. The film certainly hasn't sounded this good before. English SDH subtitles are available. 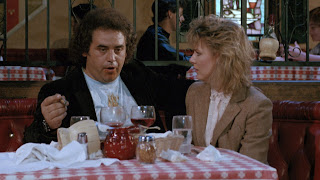 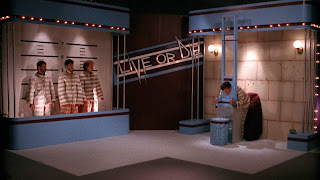 The Bottom Line
Two cuts of the film, short films from the director and a host of other entertaining and high quality extras are just the icing on top of the cake for this hilarious black comedy that looks and sounds like you've just won the grand prize on an exploitation gameshow.