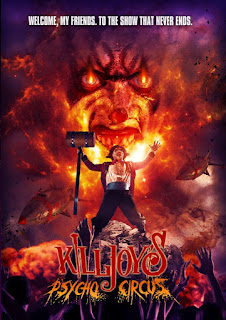 The Film
Killjoy the demon clown has escaped hell and his time spent hosting a wickedly weird talk show is interrupted when Beelzebub comes after Killjoy to trap his spirit and bring it back to hell. Killjoy and his crew must fight off Beelzebub and his psychos in an intergalactic battle of bad CGI and body paint.

KILLJOY'S PSYCHO CIRCUS is the fifth entry into the franchise which I admittedly  have very little knowledge of. I know that this film follows the fourth entry Killjoy Goes To Hell (yes, I figured that out on my own), and I've seen very brief footage from the earlier films but I had never sat down to watch a Killjoy film before now. KILLYJOY'S PSYCHO CIRCUS focused much more on Killjoy's relationship with his sidekick Batty Boop who is a fellow clown rocking a body paint suit and arguably the most annoying voice I've ever heard in film. A deliberate speech impediment and whiny, squeaky voice made every line from Batty unbearable, and she has plenty of lines. It was a welcomed surprise to be able to learn about the characters jumping in to a series so far along, I don't feel like I missed much or that I can at least survive without knowing it. 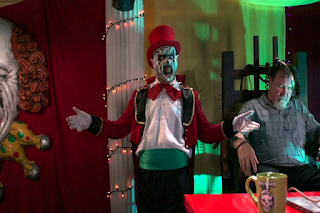 Trent Haaga plays the titular demon clown and he's the high point of the film. He's genuinely funny with great comedic timing and brings great emotion to the character through all of the makeup and latex work. Writer/director John Lechago is no stranger to the franchise having directed the last three films in the franchise and his script is surprisingly good. KILLJOY'S PSYCHO CIRCUS is a well written movie, especially by modern Full Moon standards. The acting isn't half bad from the supporting cast either. Victoria De Mare is quite good as Batty, despite her annoying voice, she plays the smitten sidekick role very well. 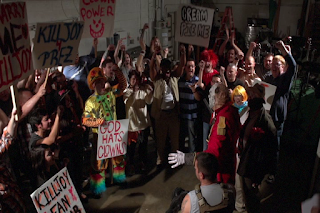 Where the film stumbles is that it's rather uneventful. This is a case where too much character development and story is just too much. I was left wanting more demon carnival shenanigans and only later on in the film do we really get any sort of action with a quick shoot out scene that easily dispatches of most of Beelzebub's psychos and a final battle that is cheesy as hell and features a Mortal Kombat soundtrack. Both of the big action sequences are definitely fun but there's just not enough of them and the film's reliance on sex jokes and toilet humor ultimately lets it down.

The Audio & Video
It's a shame that KILLJOY'S PSYCHO CIRCUS isn't being released on Blu-ray because it is a very colorful production and has interesting sets that would look fantastic in HD. That said, the DVD from Full Moon does look quite good. The colors shine through vividly and the detail level is strong. The 16x9 anamorphic widescreen transfer is sharp and clean. The 2.0 English audio mix sounds good as well with steady levels and a complimentary mix between dialogue and soundtrack. The audio is clear and crisp with no distortions. 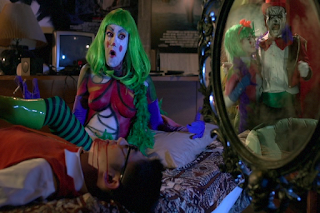 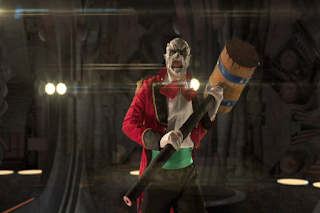 The Bottom Line
Returning Killjoy fans will likely find a lot to enjoy here but newcomers may want to watch some trailers or the first film in the series before diving into KILLJOY'S PSYCHO CIRCUS to see if this is their cup of tea. Recommended for returning fans of the series.