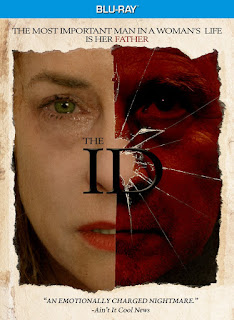 The Film
Amanda Wyss stars as Meredith, a middle aged woman living for little else than to care for her sick father. Their relationship isn't good as Meredith's father is abusive toward her every chance he gets. A phone call from an old high school friend gives Meredith a small light in her life but quickly pushes her to the brink of a broken mind.

THE ID is a small production, using a single location and only a handful of characters to tell its story. Amanda Wyss carries the film with a strong performance of a middle aged woman who has been stunted in her mental growth by an abusive father. Meredith still lives in her childhood home in a bedroom decorated with high school banners from over 20 years ago. Her only interaction with the outside world is with the girl who delivers food for her father daily but their interactions are brief and usually end abruptly with Meredith being cold and rude. She is not to blame for how she handles interactions with other people as her father, played disgustingly and perfectly by Patrick Peduto, is an absolute piece of shit to her going as far as spitting in her face and pissing his pants on purpose and laughing in his daughter's face while she has to change him.

Meredith's mind is already a mess as she has visions of killing her father and slips into these visions frequently. When her old high school boyfriend Ted looks her up for a reunion Meredith slips further into a damaged state, while something nice has happened to her and gives her something to look forward to, her Father berates her over it calling her a whore and saying she can't go which only makes things in Meredith's mind that much worse. When the reunion finally happens Ted and his wife find an obviously disturbed woman, living in a reality that doesn't exist and cut their trip short but that's only the start of Meredith's problems.

THE ID is small and tight. It's driven by characters and their performances. Wyss and Peduto are really good together, and they endure a lot. My gripes with the film are minor and deal with the writing particularly dealing with the Ted scene. Ted and Meredith hadn't seen each other since they graduation 28 years earlier, how close could they have been if they didn't have contact in nearly three decades? I understand that in her mental state Meredith could make it the big deal she did when hearing from Ted but what are the chances that after nearly 30 years a happily married man with children randomly looks up an old high school girlfriend out of the blue and then fails to mention his wife and surprises Meredith with her on arrival? That didn't make any sense to me and felt like a plot hole that could have been fixed. It doesn't take away from my overall enjoyment and appreciation from the film but it's not so big that much would have to change to fix it.

Thommy Hutson does a nice job directing this film, it's not overly stylish but he's competent in doing what needs to be done to let the film organically shine. This is a psychological thriller based around a bastardized relationship of a father and his daughter and their brief and tragic encounters with the outside world. Don't let THE ID fly under your radar as it is well worth your time.

The Audio & Video
Hutson Ranch Media releases THE ID on region free Blu-ray with a nice looking 2.35:1 anamorphic widescreen Scope aspect ratio transfer. The film has a natural color palette which is pleasing to the eye along with strong finer details and skin tones. The Dolby Digital 5.1 audio mix is free of any background noise or imperfections and has a stable mix.

The Bottom Line
THE ID is a really solid modern psychological thriller that deserves to be seen.

THE ID is available HERE
Posted by Celluloid Terror (Seth Poulin) at 2:13 PM