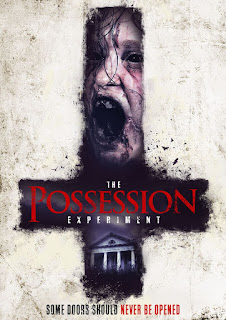 THE POSSESSION EXPERIMENT opens with a bloody violent scene of an exorcism going wildly wrong and almost everyone involved winding up dead. It is an opening scene that immediately captures the audience's attention and sets up a promising film.

Then the rest of the movie happens. And you wonder what happened. The set up is decent enough, with a college student preparing a project for his Religion class as he sets out to prove or disprove demonic possession and exorcism using the police evidence and location of the opening scene exorcism. He partners up with a stoner for the project who adds nothing to the film but to talk about eating every time he's on screen and with a pretty med student who will document his vital signs and any changes in behavior.

This decent set up is marred by completely inept editing, characters that show up out of nowhere in important scenes such as the medium who leaves as fast as she enters and we never see a character call her, talk to her, make any sort of business deal with her prior to her debut into the film. I feel the filmmakers couldn't decide what they wanted the signs and symptoms of demonic possession to be in this film as it changes from the stereotypical green puke and speaking in tongues type to fashioning a homemade Freddy Kruger glove out of X-Acto knives and going on a bit of a slasher spree. It left me with a giant question as to exactly what I was supposed to be watching.

There's lots of cues and devices lifted from better exorcism and demonic horror films and lots of them have no real reason or explanation for being in this film. Like what is the big deal that the Ouija board was found in the wall in this movie? It's never explained. Any old Ouija board could have done the same thing. That's one of many questions I'm left with in this overly unsatisfying experience.