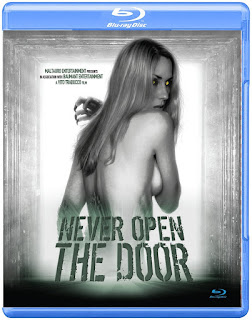 The Film
A group of friends spending Thanksgiving together at a secluded house in the forest have their good time shaken when a stranger bangs at the door and spits blood all over one of the girls and collapses upon entering the house managing only to point at one of the men and say "never open the door" before dying. What follows is a horrifically bizarre night of twisted timelines, fake identities and bloodshed.

NEVER OPEN THE DOOR lost me almost as soon as the creative and well done opening credit sequence was over. The credits had an almost German Expressionistic look and feel to them and I'm always a fan of a director taking time to make his credit sequence something special. As soon as they end we're submitted to a sequence lasting several minutes of a POV shot of something sprinting through the woods interlaced with the six friends sitting around the dinner table and the entire time I asked myself why these people are friends. They all seem to absolutely despise each other deep down but disguise it on the surface as good natured ribbing. Friends can rip on friends and laugh it off but these people were taking every chance they could to lay in to someone else, down their entire existence or even try to one up everyone there, including their wife who just announced her pregnancy. It's quite obvious nobody in this group really respects each other and frankly most of them weren't very likable either. With no reason to care about any of these people or how their night turns out the only thing left to keep me interested was the identity of the stranger and why this is all happening in the first place.

Unfortunately the script just doesn't do it. A mish mash of psychological horror, characters turning evil and disappearing and reappearing, random men stalking the house in the shadows and piss poor CGI effects all fail to be interesting. The cast is uneven, perhaps as a result of a screenplay that has characters changing so often they could never settle in. The cinematography is the easily the best technical aspect of the film. It's a stark, understated black and white look that adds a dream like feeling that helps the overall atmosphere of the film. Sadly that's all I've got to say about Vito Trabucco's NEVER OPEN THE DOOR, it has a bit of style that I admire but the idea puts the writing in to the deep end of the pool with no floaties and it can't swim.

The Audio & Video
The Blu-ray from Maltauro Entertainment looks quite good, letting the stark photography of the film which is it's best quality, shine. The anamorphic widescreen transfer is clean and has good detail levels while black levels are deep with no signs of compression or blocking. The English audio mix is stable and steady coming through strong and clear. There's no distracting imperfections to mention.

The Bottom Line
NEVER OPEN THE DOOR is unsuccessful foundation in setting up likable, realistic characters which doesn't allow for it's loftier ambitions to have a chance. It's an obvious skip when my favorite part of the film is the opening credits sequence.